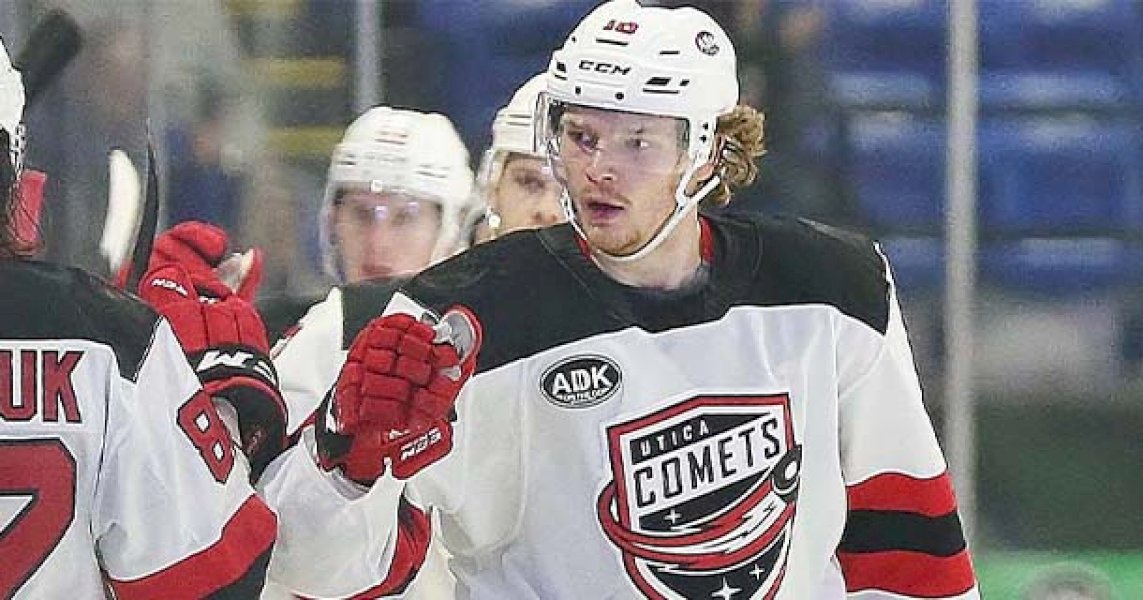 Utica, NY – Despite being outshot 34-20, the Utica Comets kept their record perfect against their Galaxy Cup competitor Syracuse Crunch, winning 4-3 in overtime at the Adirondack Bank Center.

The visitors started the scoring in the first, Gabriel Dumont beating Comets’ goalie Mareks Mitens at 13:21 to net the only goal by either side in the opening period.

Utica took the momentum back early in the second though, Fabian Zetterlund corralling a loose puck and firing a shot between the pads of Crunch goalie Hugo Alnefelt less than a minute into the frame. Scoring bounced back and forth for the remainder of the period, Charles Hudon for the Crunch answering the Comet goal with his ninth of the season and then Nate Schnarr tipping a centering pass from Zetterlund over the outstretched glove of Alnefelt to make it 2-2 at 15:39. Just as it looked as though the Comets would escape the period with a tie even after being outshot 12-6, Syracuse ended the second with a long shot from the point that would be tipped in by Otto Somppi, giving the Crunch the lead and the momentum going into the second intermission.

The away squad would not be able to capitalize on that momentum as neither team would score until late in the third, Nate Schnarr netting his second game-tying goal of the night to even it at 3-3 with just 2:55 left on the clock. Schnarr’s second would be the only of the third, and the teams would go to the extra frame to find the decider.

The names to net the game winner would be familiar ones, Zetterlund scoring his second, and Schnarr combining with Reilly Walsh to assist the goal that would make it a 4-3 Comets win.

The Comets will be in action tomorrow night on the road against the Syracuse Crunch for a 7 PM puck drop. The team will return home on Saturday, January 22, to face the Crunch at home once again, tickets are still available. Please visit uticacomets.com/tickets for more information.

Crunch Fall To Comets, 4-3, In Overtime