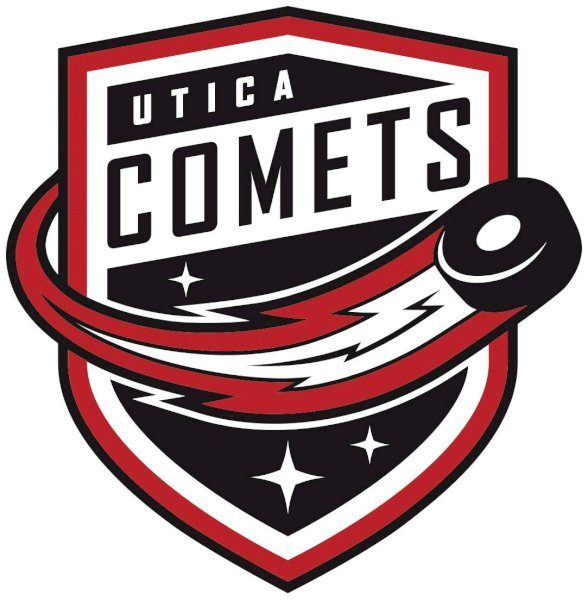 The Last Time Out: The Comets took on their I-90 rival in the 11th addition of the Empire Recycling Cup against the Syracuse Crunch coming off back-to-back victories against them on the road last week. This time, in Utica, it was an overtime victory for the visiting Crunch, 3-2.

In the first period, the Comets started the scoring with a goal coming from captain Ryan Schmelzer as he deflected the Tyler Wotherspoon pass into the cage behind Syracuse goalie Max Lagace at 3:09. This put the Comets up 1-0 through twenty minutes of play.

In the second period, at 7:46, Alex Barre`-Boulet was able to get the puck past goaltender Akira Schmid, to tie the game 1-1. But, it was rookie sensation Alex Holtz who gave the comets the lead again when his wrist shot beat Lagace low on the glove side at 11:36. The goal, Holtz’s team leading 21st also leads all AHL rookies in goals scored. At 17:59 into the period, the Crunch’s Remi Elie was able to sneak a shot by Schmid, tying the game. The score after forty minutes was 2-2. In the third period, there were no goals scored. Throughout regulation, the Crunch outshot the Comets 22-21, and a the game reamined at 2-2. In overtime, despite the chances for the Comets on the power-play during the extra session, it was Darren Raddysh who left the box and struck for a shot that beat Schmid with just 0.6 seconds left on the clock. The Comets took one point in the standings with the overtime defeat.

Kasel, 25, hails from Ithaca, New York and played his collegiate career with Skidmore College. This season with the Adirondack Thunder of the ECHL, Kasel has skated in 19 games with a record of 6-11-1 holding a .895 save percentage and a 3.59 goals against average. Kasel attending Comets training camp before the start of the 2021-22 season. Kasel played junior hockey for the Syracuse Stars which later became the Utica Junior Comets. The Stars program started in 1985 and includes former NHL goaltender and President of the Utica Comets, Robert Esche as an alumnus. Brandon played U-18 Midgets in 2014-2015 and one year of Junior Hockey for the Stars in 2015-2016.

Special Teams Ranking: Heading into the week, the Comets begin with the 6th ranked power play operating at 22.2%. At home, their power play ranks 7th in the league with a 22.4% average. On the penalty kill, Utica ranks 17th in the league at 80.5% while at home they are 3rd at 86.9%