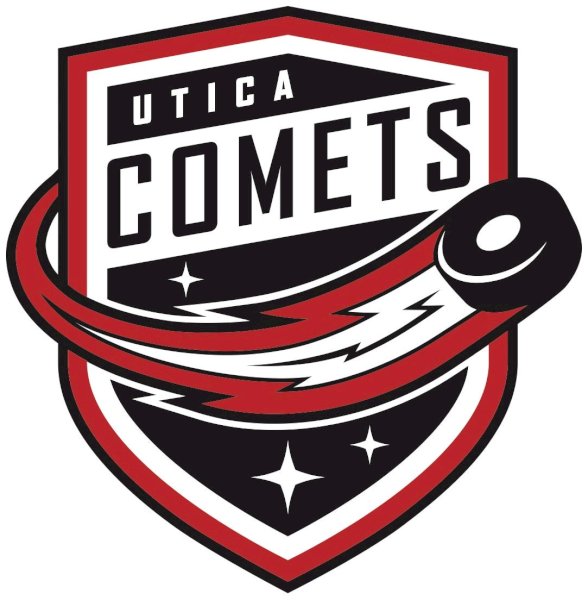 Rochester, N.Y. —  The Comets drove into Rochester on Friday night to battle their in-state rivals, the Americans, as the team is amid a three-game road swing away from Utica. While relying on goaltender Nico Daws to make one great save after another, the team managed to fight back and strike quickly in the final period to skate away with the victory in enemy territory by a 5-2 score.

In the opening period, the Comets allowed the first goal of the game when they were shorthanded. It was a point shot that deflected on the way to the goal by Lukas Rousek at 3:08 and behind Utica goalie Nico Daws. After twenty minutes of play, the Comets trailed by a 1-0 score.

In the middle frame it was the rookie sensation defenseman Simon Nemec who fired a wrist shot off a faceoff in the Rochester zone while the Comets were shorthanded. Nemec goal beat Michael Houser high to the glove side at 18:34. The goal was assisted by centerman, Brian Pinho. With that goal, Nemec has tallies in back-to-back games.

In the final period of regulation, the Amerks took the lead again and it was a great give-and-go executed by Linus Weissbach and Brandon Biro. The play, which was finished by Weissbach resulted in a 2-1 advantage for Rochester at 8:17. The Comets wouldn’t be silenced much longer, and it was the streaking Nolan Stevens who made a lovely move to shelf the puck high to the glove side on Houser at 11:39 to score his fourth of the season. The goal was assisted by Nemec, who has a two-point night and Reilly Walsh. It only took 23 seconds later for Graeme Clarke to give Utica their first lead of the game at 12:02 for his fifth of the season. The goal was assisted by Joe Gambardella and Jeremy Groleau and it put up the Comets 3-2. With just minutes left and the goalie pulled for Rochester, Tyce Thompson scored an empty net goal from Nemec. This put Utica up 4-2. Gambardella added another empty net at 18:38 to finish off Rochester.

Nico Daws finished the game with 26 saves on 28 shots while Houser stopped 17 of 20. The Comets scored a power-play goal on their only opportunity while Rochester scored once on five chances.

The Comets will play the Syracuse Crunch tomorrow night in Syracuse before making their way back home to take on the Laval Rocket on Wednesday night inside the Adirondack Bank Center at 7:00 PM. Tickets are still available for the game.