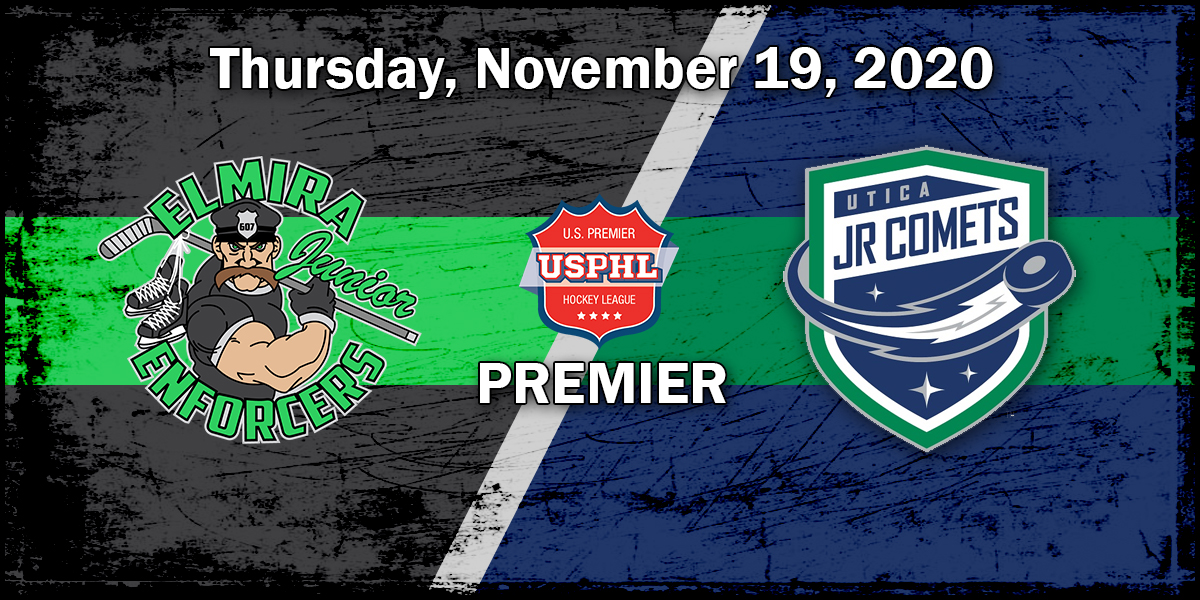 Utica and Elmira both traveled to Wilkes-Barre, Pennsylvania Thursday afternoon for a Mid Atlantic division game. It was the eighth place Comets 11th game of the season while it was the 14th for 3rd place Elmira.

The Comets had a strong first period, firing 14 shots on net versus 7 from Elmira. Joshua Kalinowski scored his fourth goal of the season to put his team ahead 1-0 8:26 into the first period on an unassisted goal. Tyson Rohrer doubled that lead just over two minutes later. A hard back checking Anthony Morin stole the puck from an Elmira defenseman before send a cross crease pass to a waiting Rohrer.

#USPHLPremier: Tyson Rohrer's goal has the @UticaJrComets up 2-0 on their Upstate New York rival @JuniorEnforcers in Wilkes-Barre, Pa., today on the home ice of @WilkesMHockey.

Tune in for upcoming second period action on @MyHockeyTV with @The_DanKShow on the call. pic.twitter.com/XUS9iO9qG2

The roles were reversed in the second with Elmira holding the 14-6 shot advantage. They also scored the only goal of the period to cut the Comets lead to 2-1.

#USPHLPremier: The @JuniorEnforcers got the only second period goal, coming off the stick of Kevin Martin, as they pull within one with one period to go vs. @UticaJrComets.

Make sure to come back soon for third period action only on @MyHockeyTV with @The_DanKShow on the mics! pic.twitter.com/ykF6GfJflG

Andrew Brzezicki set up Andrew Martino 11:42 into the third to regain the two goal lead for Utica. With Brennan Ash in the Utica box serving a Too Many Men penalty the Enforcers looked to pull within one goal. With only eight seconds remaining in the penalty they were able to do just that. Kalinowski was called for high sticking less than a minute later putting Elmira back on the power-play. They took advantage of the Comets best penalty killer being in the penalty box and tied the game at 3 only nine seconds into the power-play, at 18:17 of the period.

The Comets were not effected by the momentum lost following the two quick goals from Elmira. Rohrer scored his second of the game, which turned out to be the game winner, 27 seconds later. J.D. Speer picked up his ninth assist of the year on the goal.

#USPHLPremier Final: The @UticaJrComets hold on for a 5-3 win despite a late charge back by the @JuniorEnforcers. Here is the game-winning goal, Tyson Rohrer's second of the game. pic.twitter.com/M9JSPJGbn7

Brzezicki scored an insurance marker with 29 seconds left, his first of the season. Anthony Lore was strong in net turning away 32 of 35 Enforcers shots.

Utica takes the ice again at 9:15pm tonight (Thursday) against the P.A.L. Islanders. The game is also being played at the Toyota SportsPlex in Wilkes-Barre. Utica previously beat the Islanders 7-1 back on October 28th.

The team has a quick turn around with another game scheduled for Friday morning against Rockets Hokey Club. The puck is scheduled to drop at 9:30am for that one. Utica is 0-2 against the Rockets. They were outscored 14-4 in those two games.