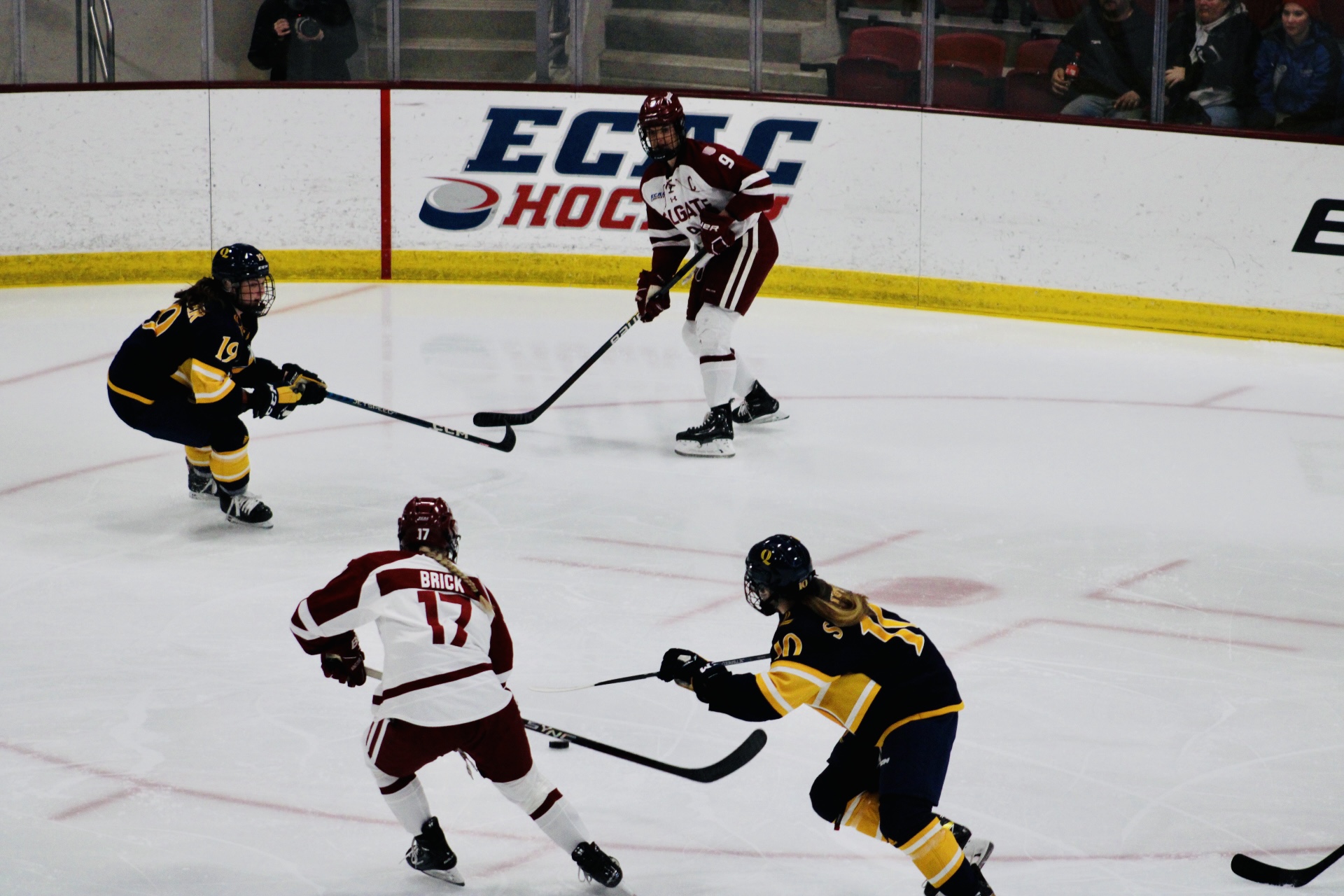 The fifth-ranked Colgate Raiders Women’s Hockey Team hosted the fourth-ranked Quinnipiac Bobcats on Friday night for a game between two of the best teams in the country. As expected, it turned out to be one of the season’s best games so far.

“It felt like a playoff game,” Colgate Head Coach Greg Fargo said after his team suffered a heartbreaking 2-1 overtime loss to their ECAC rival. “I thought it was a really, really, good game. Both teams had control of the game at different times right from the start. Two very evenly matched teams on both sides of the ice and at the end of the day, it was kind of what we expected – low scoring and back and forth”.

Quinnipiac Head Coach Cassandra Turner agreed, stating “It was a great hockey game between two strong teams in our league and it was a battle”. She also noted the contrasting play styles between the Bobcats and the Raiders.

“I think we play so hard with our sticks and we’re hard to try to win pucks against, but they’re so good with the puck offensively and they force a lot of switches and create a lot of chances – they’re hard to defend”.

The teams played a very tight-checking first period, with neither team giving the other a lot of room to work with. Although the Bobcats took two minor penalties, the number one penalty-killing unit in Division I was able to kill both of them. When the horn sounded to end the first period, the score was 0-0 with Quinnipiac leading in shots on goal by a seven to four margin.

The Raiders came out flying to start the second period, pouring eight shots on Bobcats goaltender Logan Angers in the first four and a half minutes after the opening faceoff. Colgate’s Kaitlyn O’Donohoe nearly gave her team the lead at the 16:50 mark but the puck hit the post (see photo above). Angers was able to keep the home team at bay, and after surviving the initial barrage from the Raiders, the Bobcats got some shots of their own forcing Colgate netminder Hannah Murphy to make several timely saves. Quinnipiac had a golden opportunity to take the lead with just over a minute remaining when Alexa Hoskin found herself with a chance in front of a wide-open Colgate net, but Raiders captain Danielle Serdachny kept Hoskin from getting the shot off. The score remained a scoreless tie through two periods of play.

The Bobcats would stun the home crowd just fifty seconds after the start of the third period as they got the game’s first goal after a Colgate turnover led to a Nina Steigaut goal when she snapped a shot past Murphy from the low left circle. The Raiders put a furious push on in the last half of the third period and it paid off when the nation’s leading scorer, Danielle Serdachny, tied the game with 4:43 remaining after she put her own rebound past Angers from the low slot. Colgate continued their surge after the Serdachny goal but could not take the lead so the game went overtime tied at one.

The three-on-three overtime period did not last long, as just thirty-five seconds after it started, Quinnipiac’s Olivia Mobley picked up a rebound off of her own blocked shot and ripped a shot into the top left corner of the Colgate net past Murphy to give the Bobcats a 2-1 win. Coach Turner said of the sequence that ended the third period and then the game-winner: “Colgate really challenged us especially late, they had such a flurry. I was really impressed with our goaltender and the saves she made at the end of the third, and phenomenal for Mobley to get out there on the first shift and score. She’s a great player so it was nice to see her get that goal.”

Coach Fargo also said of the ending “a really good player makes a good play at the end and finishes it often when there’s a lot of ice at three on three. I think as coaches we’ll look back at this game and see there’s a lot to like from our game, and this is something we can take forward with us in a positive way”.

Game notes: Colgate outshot Quinnipiac 28 to 25…Colgate was 0/2 on the power play as was Quinnipiac…Quinnipiac’s Lexie Adzija led all scorers with two points (both were assists)…Allyson Simpson led Colgate in shots with six, while Adzija and Maya Labad led Quinnipiac with five shots each.

Three Observations From the Game

This Was a Potential Game of the Year

Friday night’s game between Colgate and Quinnipiac had everything a hockey fan could want from a game. It had outstanding goaltending, dramatic scoring, physicality, and a lot on the line between two rivals. After the game Coach Fargo said, “This is a team over there that is as good as any team we’ve seen so far this year, but it’s a game like this that we’ll see down the road and in the playoffs, so hopefully both teams get a chance to face off again down the road”.

For the sake of every hockey fan out there, we can only these two teams meet again this season.

No Time to Dwell For Either Team

Both the Raiders and the Bobcats have a quick turnaround as both teams are playing again on Saturday afternoon. Quinnipiac heads to the Southern Tier to take on ninth-ranked Cornell, while the Raiders remain at home to face the Princeton Tigers – a team that is just outside of the top fifteen in the latest USCHO poll. When asked his thoughts on the Tigers, Coach Fargo replied “they’re a team that plays with a ton of speed. They’ve got a world-class player there in Sarah Fillier who’s fresh off of Olympic gold last year, and it’s always emotional against Princeton because it’s so fast. I think it’ll be a game between two really quick teams”.

This will be a rematch for the two teams as the Raiders defeated the Tigers 5-1 on October 28th in Princeton. This Saturday’s game is scheduled to begin at 3 pm EST.

Former Clinton High School star and current Quinnipiac defender Mia Lopata played her first game in her home region as a collegiate player on Friday night, and Coach Turner is thrilled to have her on the team.

“She is just full of energy and is a phenomenal teammate and player in our program, I’m excited for where she’s headed. She jumped in last weekend against Dartmouth and put in some great minutes and opportunities. She has a strong shot, she can jump in on the offensive side of the puck, and is getting faster and stronger. We’re excited for the years to come with her”.