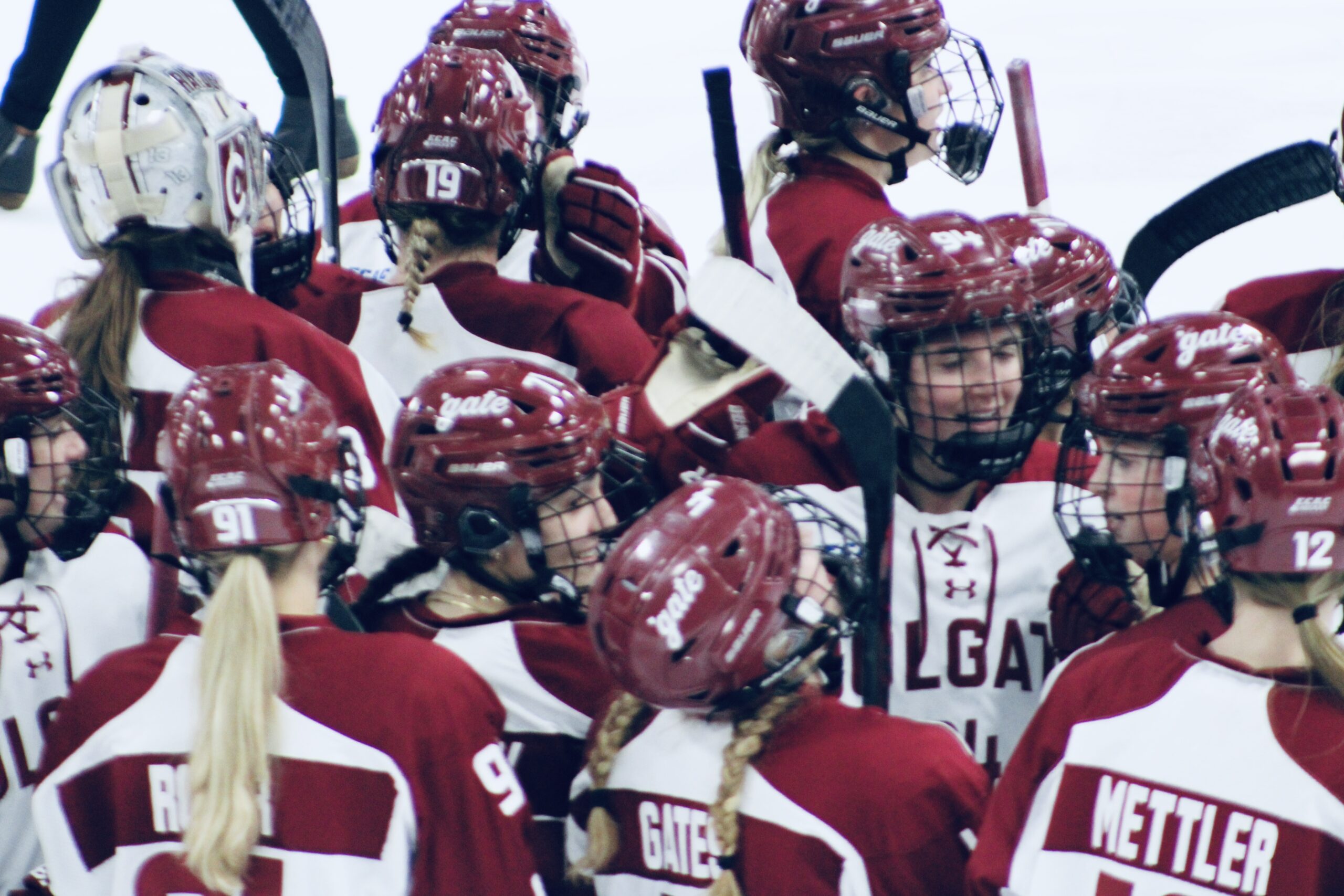 The sixth-ranked Colgate Raiders Women’s Hockey Team (11-1-0 overall, 2-1-0 ECAC) and the tenth-ranked Clarkson Golden Knights (10-2-1 overall, 2-1-0 ECAC) are bitter ECAC rivals that have a lot in common with each other. They both are contenders for the ECAC title, have skaters in the top ten of the national scoring list, and also have goaltenders among the top five in the country. All of these elements were on display on Friday night in a physical game at the Class of 1965 Arena won by the hometown Raiders by a score of 2-1.

Colgate entered Friday night’s game in unfamiliar territory, as they were coming off of a defeat. “Getting our first loss was kind of a shock to the system I think for a lot of us,” said senior defender Maggie MacEachern on the Raiders mindset entering Friday night’s game after suffering that first loss of the season last Saturday against Quinnipiac. “(It was) also like a wakeup call that you know there were some other really, great teams, out there and we couldn’t be happier to be one of them”.

Colgate head coach Greg Fargo also commented on the previous weekend, saying “I just think it was an opportunity for us to respond the right way. I think with this team and in general, regardless of the previous day’s results, it’s truly about getting better. Our league is so closely contested every night regardless of who we play. To me, the most important thing is our team has the mentality that we’re going to be the best at getting better over the course of the season, and I think the team that does that the best is going to have a great chance to win”.

The Raiders did not need a wakeup call on Friday night, as they applied offensive zone pressure right from the opening faceoff. That pressure paid off early as at the 4:44 mark, after a mad scramble in front of the Golden Knights crease resulted in Kalty Kaltounkova sliding a puck past goaltender Michelle Pasiechnyk to give the home team an early 1-0 lead. The goal was Kaltounková’s ninth of the season which makes her Colgate’s leading goal scorer. The Raiders outshot the Golden Knights by a ten to six-margin in the first period, but the Kaltounkova goal was the only tally of the frame.

The first period had an element of physicality that can be expected when closely matched rivals meet, and that physicality would carry through the rest of the game. There was a total of eighteen shots taken in the second period (eleven by Colgate and seven by Clarkson), but no goals were scored, as Pasiechnyk and Kayle Osborne proved why they are among the best goaltenders in the entire country.

The Golden Knights didn’t waste any time getting on the scoreboard in the third period, as just twenty-one seconds after the opening faceoff, Gabrielle David snapped a wrist shot from the left circle past Osborne to make the score 2-1. Clarkson continued to apply pressure after the David goal, but their momentum was stymied when they took a minor penalty for interference a little over three minutes after the goal. The Raiders did not capitalize on the ensuing power play but later in the period thought they had taken the lead on what appeared to be Sammy Smigliani’s first goal of the season. Although the officials signaled it was a goal on the ice, after going to video review the goal was overturned, much to the chagrin of the home crowd.

Despite the disappointment of the disallowed goal, coach Fargo said “I thought our team did a really nice job just to focus on the next play. They weren’t too down after that, and I thought quite frankly a big turning point in the game is our ability to respond there and found a way to get it done”.

With 3:08 remaining in the third period, the Raiders scored again, and this time there would be no video review. MacEachern fired a shot from the top of the left circle past Pasiechnyk and inside the far post for her second goal of the season. “I know I got the puck I think low to high and I had a screen coming at me. Tried to just shoot through that and then went bottom right corner” she said about what would be the game-winning goal.

After the game, coach Fargo was very happy with his team’s performance, saying “I liked how we tracked down pucks. One of the things we talk a lot about is being on top of them and getting back above pucks, and I thought we had a commitment from our forward group to do that”. He also said, “the other thing I really liked is our ability to keep the puck moving in the offensive zone…the team did a really good job keeping pucks moving and hunting down pucks today, and I think ultimately there’s part of the difference”.

Notes: Colgate outshot Clarkson by a margin of 31-23…Colgate was 0 for 4 on the power play, and Clarkson was 0 for 2…Danielle Serdachny drew an assist on MacEachern’s goal giving her twenty-two points – which currently leads Division I…The Raiders now play their next six games on the road, and won’t play at home again until January 6th…Colgate and Clarkson play each other again on February 4th at Clarkson.