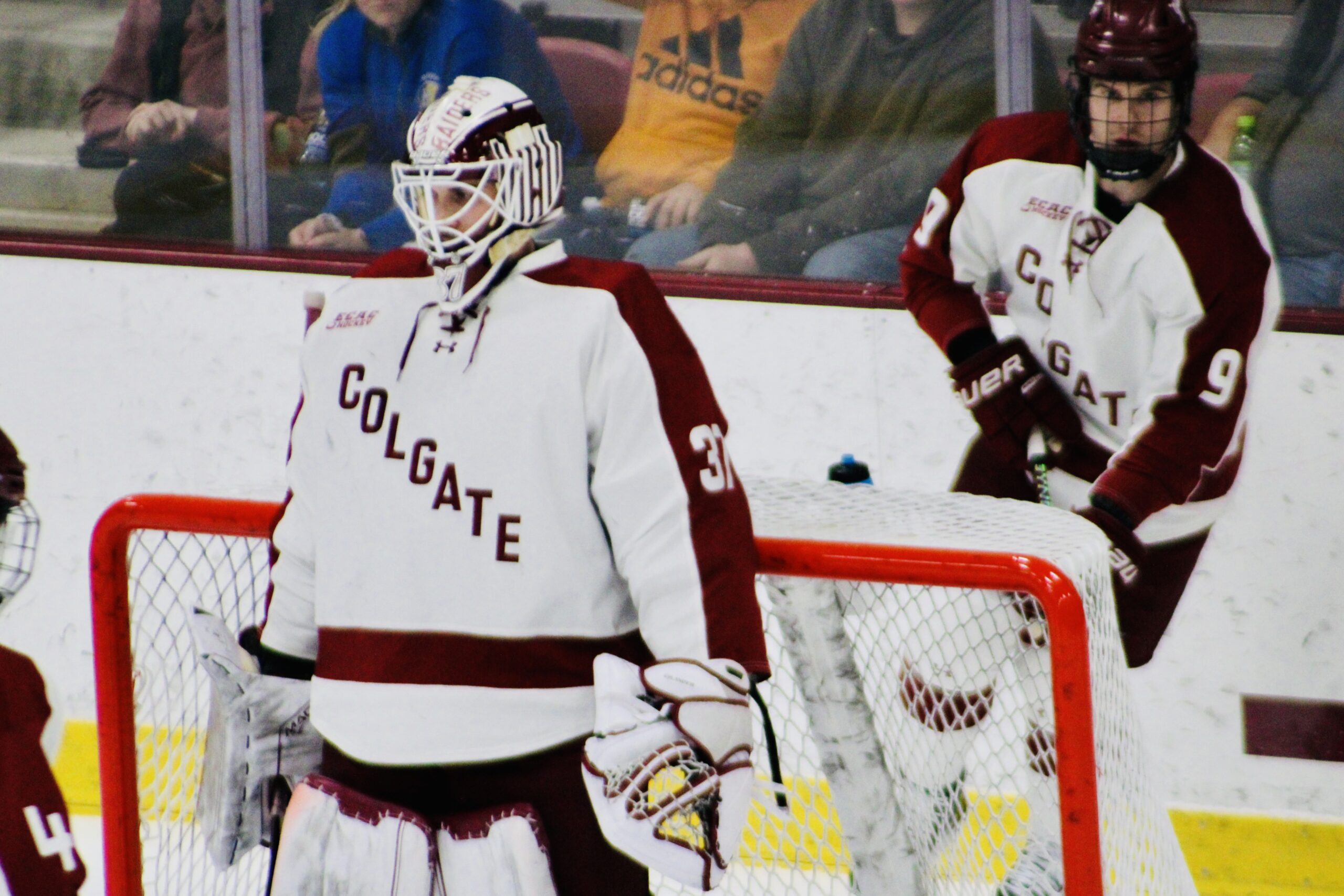 The Colgate Raiders Men’s Hockey Team (8-9-1 overall, 6-2-0 ECAC) is entering their mid-season break in style, winning both games they played this weekend at the Class of 1965 Arena. Both victories were over ECAC rivals – on Friday night they defeated Dartmouth and on Saturday night they upset the seventh-ranked Harvard Crimson.

The Dartmouth Big Green (1-8-1 overall, 1-5-1 ECAC) entered Friday’s game desperately needing a win, as they had lost four straight games. The Raiders were in need of a win themselves, as they had lost two games the weekend before against Niagara by one goal each. Colgate would prove to be ungracious hosts right from the opening faceoff, as Alex DiPaolo scored at just one minute and thirty-five seconds into the game and never looked back. After the DiPaolo goal, the Raider’s power play went to work – striking twice before the close of the period. The first power-play goal came at the 9:46 mark when Alex Young scored his sixth goal of the season, and then five minutes later Simon Labelle dented the twine to give the home team a 3-0 lead going into the first intermission. Reid Irwin drew the primary assists on both power-play goals.

The Big Green would get on the scoreboard at the 5:03 mark of the second period when John Fusco scored his first goal of the season. Forty seconds later Fusco’s joy would turn into disappointment as he took a five-minute major and game misconduct for contact to the head. The Raiders did not capitalize on the lengthy man advantage but did add to their lead with just one minute and ten seconds remaining in the frame when Matt Verboon’s eighth goal of the season gave Colgate a 4-1 lead heading into the second intermission.

Dartmouth put the pressure on in the third period trying cut into the sizable Colgate lead by firing eleven shots at Gylander. It was all for naught, however, as the junior netminder stopped all of them and it was the Raiders who scored the final goal of the game when Daniel Panetta scored his first of the season into an empty net to seal a 5-1 victory.

With momentum on their side from their win the night before, the Raiders faced a daunting challenge on Saturday night as they hosted the seventh-ranked Harvard Crimson for their Teddy Bear Toss game. The stuffed animals wouldn’t fly until the second intermission, but the goal horn sounded early in the game as Matt Verboon deflected a Reid Irwin shot that trickled past Harvard goaltender Aku Koskenvuo and in for the only goal at the 1:34 mark of the opening period.

The Crimson responded with a blistering first ten minutes plus of the second period. They got on the scoreboard at the 2:04 mark when team-leading points scorer Sean Farrell beat Colgate goaltender Carter Gylander to tie the score at one. Farrell struck again just thirty-four seconds later to make the score 2-1, and then Marek Hejduk extended the lead to 3-1 with just over ten minutes gone in the middle frame.

The Raiders were down but not out, however, as they stormed back in front of a crowd of over 1,000 at the Class of 1965 Arena. One minute and forty seconds after the Hejduk goal, Colgate lit the lamp on the power play, as Colton Young sent a cross-ice pass to his brother Alex who ripped a shot from the left circle into the Crimson net. Two minutes later, it was a carbon copy as the Young brothers hooked up again on the power play – this time Colton set up Alex up with a pass from the right side to the low slot to tie the game at three.

After the stuffed animals that were being donated to Toys For Tots were cleared off the ice during the second intermission, the teams returned for the third period tied at three – but that wouldn’t last long. The Raiders took the lead just thirty-one seconds after the opening faceoff when Ross Mitton won a draw in the Harvard zone and set Alex DiPaolo up in front of the net for his sixth goal of the season giving his team a 4-3 lead. Mitton’s generosity wasn’t done, as with ten and a half minutes left he sprung Colton Young for a shorthanded breakaway goal to put the Raiders up by a score of 5-3.

Twenty-six seconds after surrendering the Colton Young shorthanded goal, the Crimson got a goal for themselves on that power play. Alex Laferriere, who co-leads the team in goals with Ferrell, beat Gylander to get his team back within one goal. Harvard put on a push to tie the game in the closing two minutes, but could not get anything else past the Colgate netminder. Alex Young then completed his hat trick with an empty-net goal with three-tenths of a second remaining, to give the Raiders a 6-4 upset victory over the Crimson.

With the two regulation victories over ECAC opponents, Colgate is now in third place in the conference with seventeen points – trailing only Harvard and Quinnipiac. They return to action on December 30th and 31st at the Class of 1965 Arena for games against the Maine Black Bears of the Hockey East conference. For more information about Colgate Raiders hockey, visit https://colgateathletics.com.