Colgate Knocks Off #9 Harvard In Overtime 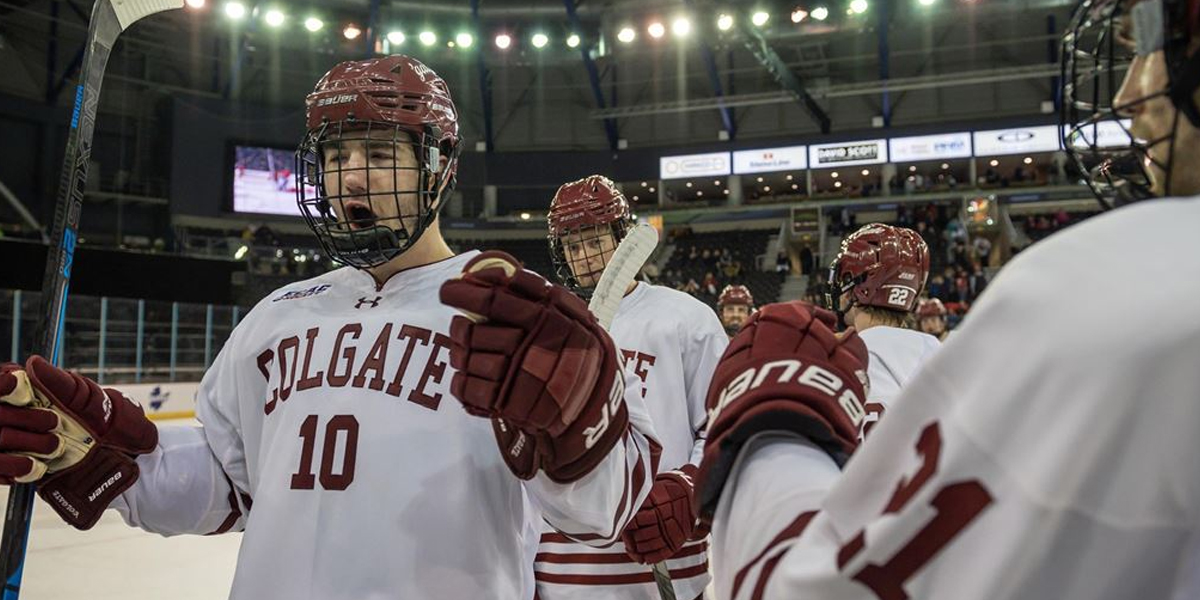 Colgate got into penalty trouble early, but as soon as Bobby McMann returned to the ice from serving a boarding minor he put Colgate on the board. McMann extended his point streak to four games with the goal.

Shifty moves from the box to the twine.

Jared Cockrell scored at the 17:28 mark of the first just seconds after a Colgate power-play expired. Vachon and Nick Austin picked up assists. Dartmouth scored a power-play goal at 1:58 of the second to cut the deficit to one goal.

Three minutes later the Raiders picked up a power-play tally of their own while on a 5-on-3 advantage. Colton Young scored to pick up his second point of the evening. Jacob Panetta and Vachon assisted. Paul McAvoy added another Colgate goal at the 14:42 mark through the five hole of the Big Green goaltender. John Snodgrass and Trevor Cosgrove picked up the helpers.

Vachon recorded his third point of the game on a coast-to-coast play with 14:42 remaining in the third.

Vachon improves to three points on the night as he makes it 5-1. #PlayFast pic.twitter.com/e63oKAmClU

Colgate knocked off nationally-ranked Harvard thanks to an overtime game-winner from Ben Sharf. Four different players scored to earn their first weekend sweep of the season.

Despite a pair of Raiders power plays in the first period, the teams skated to a 0-0 finish of the first period. The pace of the game picked up in the second period and Farrier came up big once again in net. Colgate scored just seconds after a Harvard penalty expired. The goal was scored at 6:56 of the period by Young with assists going to Austin and Cockrell.

Harvard took a 2-1 lead following goals at 14:32 and 17:17 of the period. Tyler Penner tied the game up just 42 seconds later. Sharf fired a pass across the slot that Penner one touched into the back of the net tying the game at two after 40 minutes.

Just 42 seconds after Harvard, Penner pops this in to even the game. 👇 pic.twitter.com/QSelSAoG8G

Midway through the third Colgate drew its fourth power play of the night. Once again, a goal was scored just after the man advantage expired. McMann scored at 10:08 to give the Raiders a 3-2 lead. Harvard responded quickly scoring at the 11:57 mark tying the game up once again.

McMann was whistled for hooking at the end of the third period giving the Crimson a full two minute power-play to open up the overtime period. The Raiders successfully killed it off and only allowed one shot on goal during the man advantage. On the following shift Sharf powered down the ice and cut hard to the net before stuffing the puck behind the Harvard goalie for the win. Panetta picked up an assist on the game winner. Farrier finished with 30 saves.

🧹 Raiders earn a 4-3 OT win at No. 9/12 Harvard to seal the weekend sweep! 🧹#PlayFast pic.twitter.com/eAyCqyxiR1

Colgate ended the first half of their season on a high note winning four of their last five games. The Raiders are now off until after a weekend series on the road in Ohio State December 27th and 28th.

Utica Loses Fourth In A Row