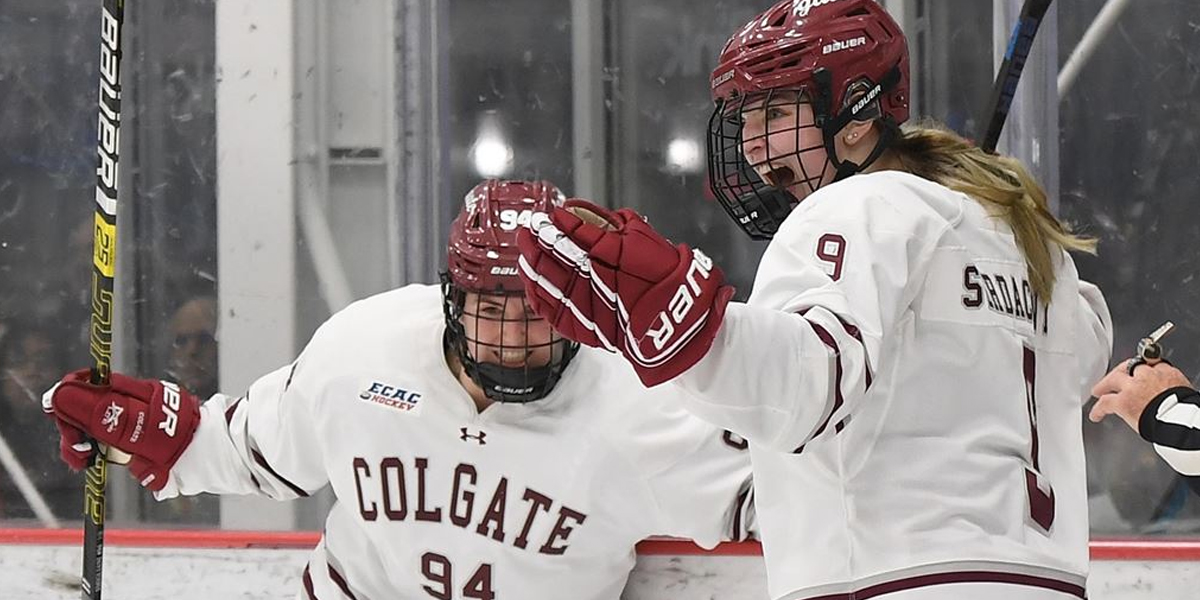 Colgate opened the Battle of the Burgh tournament with a 1-1 tie against #3 Northeastern. The Huskies came out firing and went ahead 1-0 less than five minutes in. Northeastern had two power play opportunities immediately following the goal, but the sixth ranked Colgate penalty kill was up to the task.

The second period was a stalemate with Liz Auby and the Huskies goalie both making 11 saves. Auby continued to keep her team in the game in the third period as Colgate looked for the tying goal. Finally, with under five minutes remaining Colgate got on the board. Danielle Serdachny scored the equalizer assisted by Sammy Smigliani and Shelby Wood.

Neither side could find the back of the net in overtime and the game went into the books as a tie, but a shootout was necessary to determine who would play for the championship the next day. Northeastern won the shootout 2-0 and advanced to the championship game.

The Raiders found themselves in a 2-0 hole after only five minutes of play. The Raiders battled back and evened things up thanks to goals from Serdachny (PP) and Allyson Simpson at the 12:32 and 14:45 mark of the first period. However, Robert Morris netted one more with only 3 seconds left on the clock to take a 3-2 lead into the first intermission.

Tanner Gates tied the game at three all on a power-play tally 322 into the second period assisted by New Hartford’s Sydney Bard and Smigliani. Smigliani gave Colgate their first lead of the afternoon with her goal at 9:27 of the period. Once again, Robet Morris scored another late period goal tying the game at 4-4 with 20 minutes to play.

Robert Morris scored the first goal of the third period to take a 5-4 lead with 12 minutes to play. Serdachny and Malia Schneider teamed up to tie the game again at the 15:28 mark. It looked like the game would be heading to overtime, but Robert Morris had other plans. They managed to sneak one past Auby at 19:53 of the period to win 6-5.

Colgate begins a stretch of 14 straight ECAC games to wrap up their season this weekend. They play at RPI Friday at 3:00pm and at Union on Saturday the 11th, also at 3:00pm.