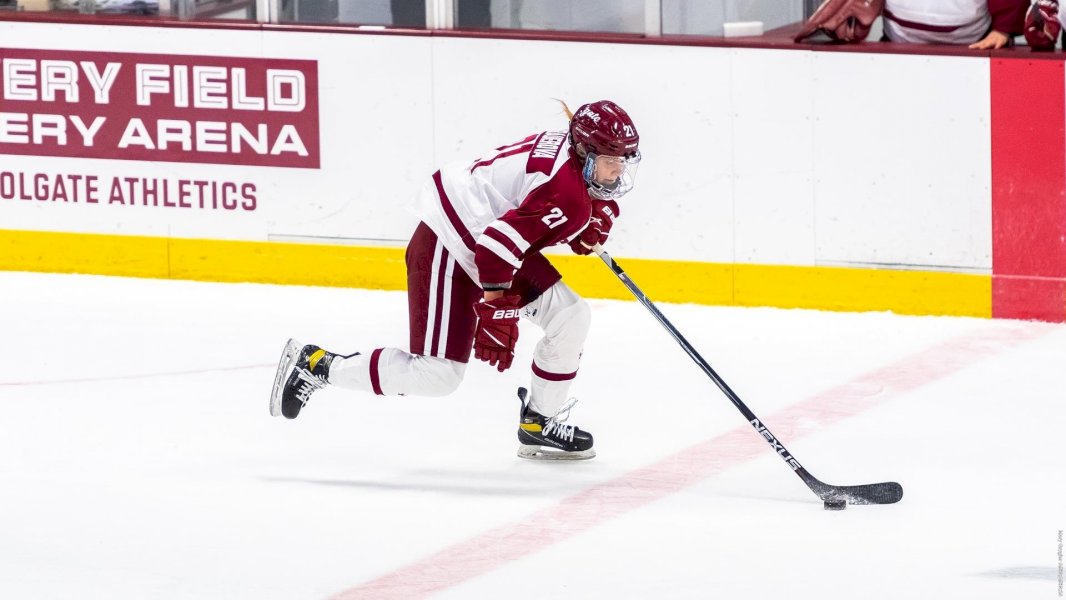 HAMILTON – The opening game of this weekend’s top five matchup between No. 3 Colgate and No. 4 Minnesota saw a little bit of everything, but it ended with the Raiders first defeat of the season 5-3 on Friday evening at Class of 1965 Arena.

Kalty Kaltounkova, Neena Brick and Noemi Neubauerova were Colgate’s goal scorers in the back-and-forth affair. Kaltounkova added an assist for a two-point effort. Kayle Osborne finished with 20 saves in her first loss of the season between the pipes.

Penalties filled the first period and both teams benefited from special teams. Colgate took advantage of a 5-on-3 just a minute into the game when Kaltounkova crept in from the blue line and sent a wrist shot top shelf from the far faceoff circle.

Minnesota countered with two quick goals to take its first lead. The Gophers tied the game as a Raider penalty expired and then claimed a 2-1 advantage 28 seconds later on a goal by Abigail Boreen just over eight minutes into the game.

As the penalties piled up, it wasn’t long after both teams returned to full strength when Brick capitalized on a loose puck. Brick from point blank rifled a shot over the glove of the Gophers’ goaltender and bar down to tie things up at 2-2 at the 16-minute mark.

Colgate killed one more penalty down the stretch and the two teams skated even strength for the final two minutes of the period that ended with the score 2-2.

Second-period goaltending kept the game even until Minnesota struck twice in the later stages. The second tally came on a shorthanded breakaway, but Colgate answered on the same power play. Kaltounkova from behind the net found Neubauerova in front for a one-timer to cut the deficit to 4-3 at the second intermission.

Shots were dead even 9-9 in the third period, but Minnesota was the only team to find the back of the net. Boreen scored her second of the night on a rebound and the visitors withstood Colgate’s last gasp with an extra attacker to hold on for the 5-3 final.

The Raiders held a 29-20 advantage in shots for the game. Colgate finished 2-for-6 on the power play and held the Gophers to an 0-for-6 line on the player advantage.

The two teams close out the weekend series at 2 p.m. on Saturday at Class of 1965 Arena.