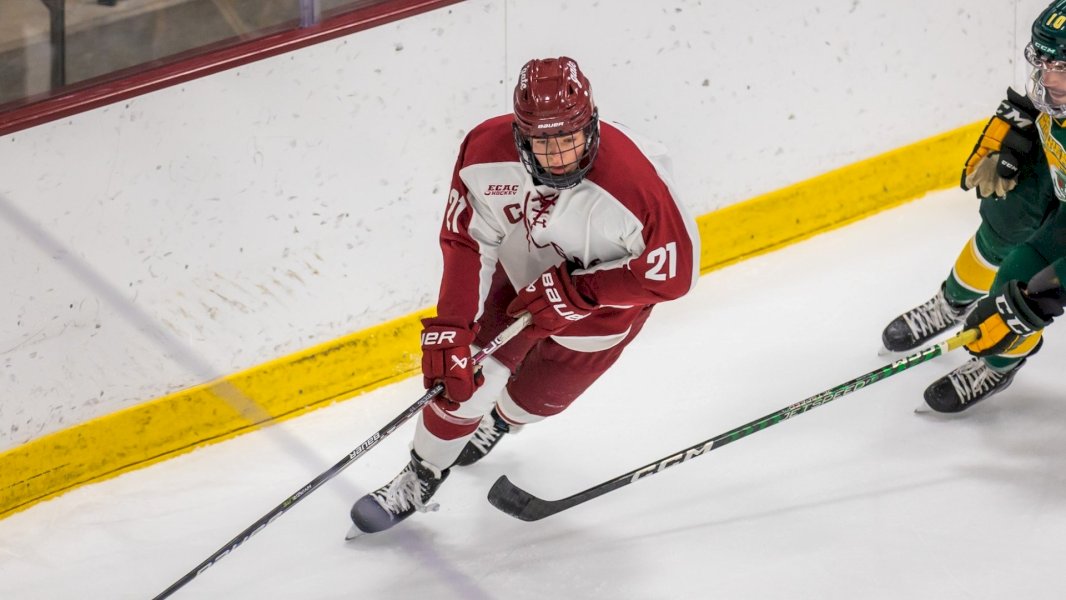 HAMILTON— A first period goal from Alex Young was not enough as Colgate fell 4-1 to Northern Michigan on Saturday at the Class of 1965 Arena.

Young struck first for the Raiders on a power play after the Wildcats got called for interference. Matt Verboon played a pass to Nick Anderson who played the puck to Young for a one-time shot he rocketed into the back of the net.

Colgate continued to attack in first, outshooting Northern Michigan 9-8 in the opening 20 minutes.

NMU came out firing in the second, as the Wildcats scored two goals in the period to take the lead. Seven and a half minutes in, Reilly Funk played a pass back to Brett Willits that he finished off from close range to make it 1-1.

Four minutes later, AJ Vanderbeck ripped a shot that got saved by Carter Gyladner. Andre Ghantous tapped the puck back to David Keefer, who put his shot into the net to give the Wildcats a 2-1 lead.

Northern Michigan scored two more in the third period to secure the win. Just under two minutes in, Andre Ghantous stole the puck away and skated down the ice. He tried making a pass across to a teammate but it got blocked and bounced back to him for a shot that he fired into the back of the net.

The Raiders had a pair of man-up advantages in the middle frame that they could not find the back of the net on.

With 7:38 remaining in the third, Colgate went on its seventh power play. The Raiders registered a handful of shots during the power play but could not score.

Colgate’s first power play opportunity of the game came at the 11:22 mark of the first. The Raiders had another man advantage five minutes later that they could not capitalize on.

Colgate held the advantage in shots as it fired 28 compared to the Wildcats’ 20. The Raiders also controlled the faceoff circle going 31-53.

Carter Gylander made 28 saves in the net for Colgate, 16 of which came in the opening two periods.

“We had enough chances to win that game tonight. Multiple grade A opportunities that just didn’t go. If people simply look at the score they might think the game was one-sided, but it was not. I loved our effort and our competitive level. These two games against a very good team will help us in the long run. We believe in our process and will keep grinding. This is a good Colgate hockey team.”

Colgate heads west for its first road trip of the season taking on Arizona State next weekend. Both games begin at 10 p.m. EST.