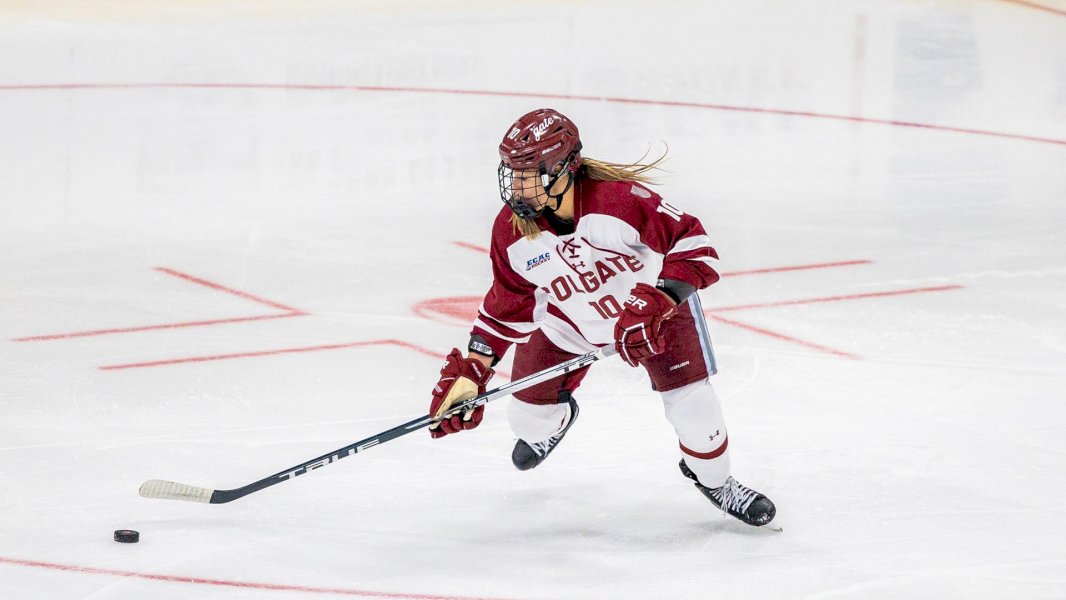 NEW HAVEN, CONN.— Colgate pulled out another comeback victory on Friday, scoring two goals in the third period in a 3-2 win over Quinnipiac in the ECAC Hockey semifinals.

Allyson Simpson scored the game-winner with four minutes remaining in the final period. Danielle Serdachny found Kaitlyn O’Donohoe who skated up the ice and played a draw pass to Simpson for a one-time shot that she ripped past the Bobcat’s goalie.

Kalty Kaltounkova tied the game up two minutes before that when she collected the puck in front of the goal and then finished off her shot from close range.

Hannah Murphy made a huge save on a Quinnipiac breakaway in the third, preventing a goal from point-blank range by stretching  out her leg. The first-year finished the night with 26 saves.

Quinnipiac took a 2-1 lead three minutes into the second. Ann-Frederik Naud skated along the boards and then in toward the goal before firing a shot that was saved by Murphy. Olivia Mobley then skated in and finished it off the rebound.

After falling behind, Colgate equalized with just over six and a half minutes left in the middle frame. Serdachny passed ahead to O’Donohoe who took a shot that was stopped on a pad save by QU’s goalie, but Eleri MacKay skated in and tapped it in off the rebound.

The Bobcats’ first goal came on a power play five minutes into the second. Taylor House passed to Sadie Peart who skated into the left faceoff circle and fired a shot from around the goal line that hit off Murphy’s glove and fell between her legs into the net.

Colgate finished with a 41-28 advantage in shots.

“It was a great playoff hockey game as we anticipated. You don’t get to this point without knowing you’re going to get everybody’s best and those were two good teams going at it. The team responded well as they have this season when we have been down , and I thought that third period was incredible. Overall, a great game with lots of momentum shifts.”

The Raiders advance to the ECAC Hockey championship game on Saturday and will play Yale at 3 p.m.

Men’s hockey takes on Colby in NESCAC semifinals this Saturday