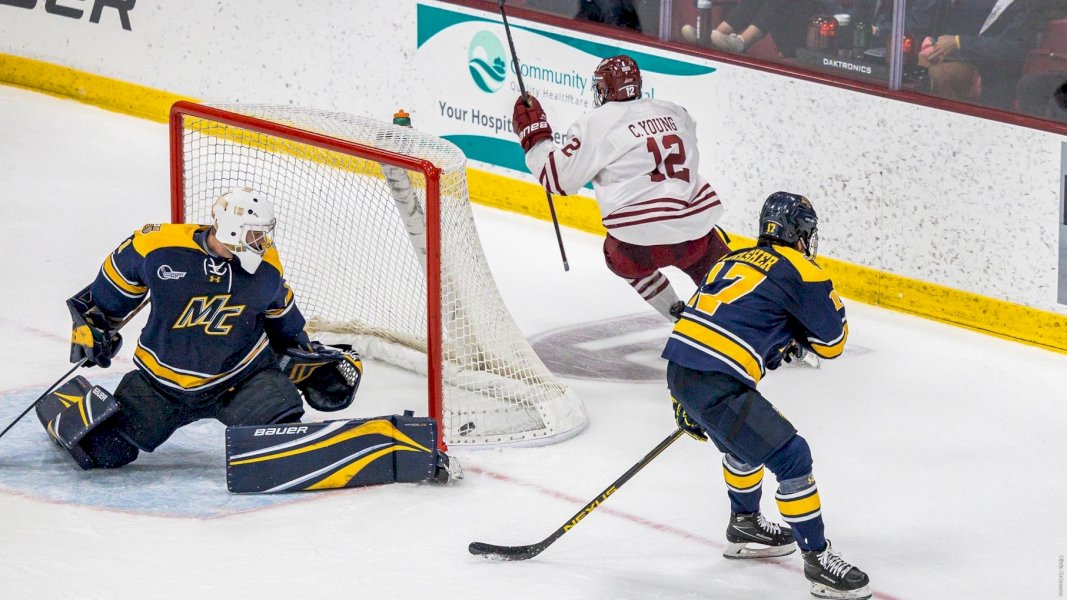 HAMILTON – Colton Young scored the game-winning goal late in overtime and Colgate stayed perfect on the season with a thrilling 2-1 victory over Merrimack on Friday night at Class of 1965 Arena.

Playing its first home game in front of fans in 587 days, Colgate gave the crowd an entertaining night of hockey that ironically ended the same way that one did March 7, 2020, against Brown – with an overtime game-winning goal for the Raiders.

Young was the 3-on-3 overtime hero three minutes into the extra session. Nick Anderson deep in his own zone found Young on the right side and Colgate’s junior forward took care of the rest. Young beat his defender along the boards, raced in on goal, and fired a low wrist shot inside the far post before being met by the squad in celebration with 1:47 showing on the clock.

The two teams played back-and-forth all night with a goal on each side in the second period. Tommy Bergsland staked Colgate a 1-0 lead when his wrist shot from the point beat a screened Warriors goaltender with 9:44 remaining in the frame.

Colgate’s lead did not last, as Merrimack took advantage of a 2-on-1 opportunity and Max Newton found the back of the net just over a minute later.

Those two goals were the only blemishes on either net minder until Young broke the tie in overtime. Carter Gylander finished with 19 saves to earn the win. His counterpart Hugo Ollas had 30 saves in the loss for Merrimack.

With the win, Colgate improved to 4-0 on the season and now stands alone as the only undefeated men’s hockey team left in Division I. The Raiders are undefeated through four games for the first time since 2004.

“It was a hard fought win. Merrimack played a very good game. They had us bottled up at times but our guys didn’t panic and we found a way to exit better as the game went on and as a result generated more scoring chances. Colton Young has been one of our best forwards since opening night so it was fitting he got the winner in overtime. It was a great goal. It’s a quick turn around with a 4 p.m. start so we need to reset quickly.”

Colgate and Merrimack meet again on Saturday at Class of 1965 Arena. Faceoff is set for 4 p.m.

Crunch Rally For 6-4 Win Over Monsters In Season Opener