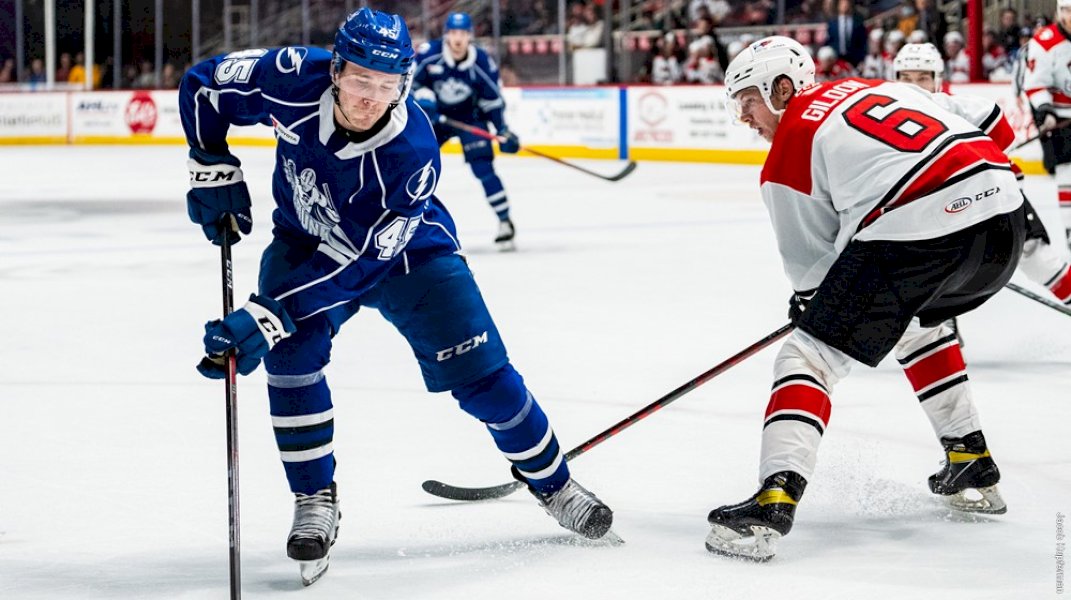 SYRACUSE, N.Y. – The Charlotte Checkers had a four-goal third period rally to defeat the Syracuse Crunch, 5-3, tonight at Bojangles’ Coliseum.

The Crunch and Checkers split the two-game weekend series and Syracuse now sits at 7-10-2-1 on the season.

Goaltender Amir Miftakhov turned aside 24-of-28 shots in net for the Crunch. Devan Dubnyk recorded the win with 17 saves between the pipes for the Checkers. Syracuse was unable to convert on two power play opportunities, while Charlotte went 2-for-6,

The Crunch were first to score just 30 seconds into the game. Charles Hudon skated the puck down the left wing on an odd-man rush before sending it towards the net for Gabriel Dumont to redirect past Dubnyk. The Checkers were quick to respond and tied the game 2:19 later when Ryan Lohin picked off a pass in the right circle and sent the puck to Cale Fleury to score with a wrister from the high slot.

Syracuse regained their lead 2:21 into the second period. Simon Ryfors forced a turnover in the neutral zone and sped into the zone to score from the right circle. Halfway through the frame, the Crunch doubled their lead. Cole Koepke shoveled a backhander towards the net that went off Otto Somppi and in.

The Checkers rallied for a four-goal third period to comeback and steal the game. It started 12:24 into the final frame when Miftakhov misplayed a dump in by Connor Carrick. Four minutes later, they tied the game off a long right-point shot from Cole Schwindt. Fleury potted his second of the game at the 17:50 mark with a shot from the blue line while on the power play to put Charlotte on top. With 22 seconds remaining, Scott Wilson hit the empty net while on the man-advantage to secure the win.

The Crunch wrap up their road trip in Toronto against the Marlies on Wednesday.