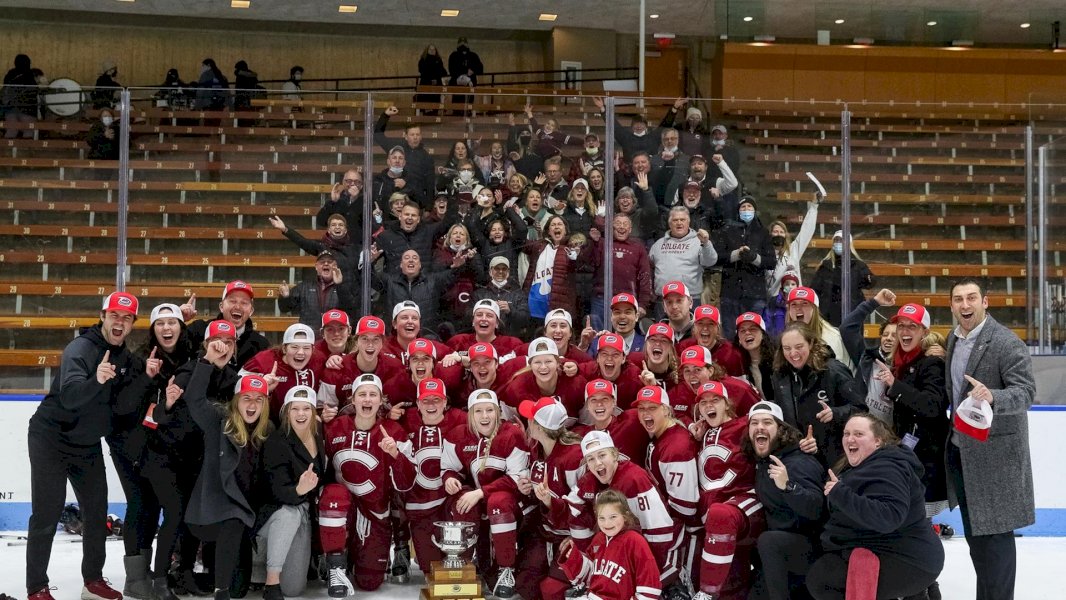 The Colgate women’s hockey team has found ways to win during the ECAC playoffs and the Raiders did just that on Saturday with a 2-1 overtime win over Yale to claim their second straight conference championship.

Kalty Kaltounkova scored the game-winner five minutes into overtime when she took the puck away from a Yale defender then skated in and flipped a backhand shot past the Bulldogs’ goalie. Kaltounkova’s clutch goal helped her earn tournament MVP honors.

After trailing for the first two periods, Kaitlyn O’Donohoe equalized for the Raiders a minute and a half into the third when she tapped in a loose puck in front of the net off a pass from Danielle Serdachny. Taylor Kirwan tallied a secondary assist on the goal.

Colgate picked up a big penalty kill with eight minutes left in the third after Serdachny was called for cross-checking.

The Raiders outshot the Bulldogs 11-7 in the second period, generating some good looks at goal that they couldn’t quite finish off. With 4:44 remaining in the period, Katie Chan played a pass ahead to Serdachny, for a shot in front of the goal, but she was unable to get enough on it. Serdachny broke free and had another open look at  with 45 seconds remaining, but her shot was saved.

Hannah Murphy kept the Bulldogs scoreless in the final two periods, including 11 saves in the third for a total of 29 on the night.

Yale got on the board with 10:15 remaining in the first. Charlotte Welch passed ahead to Claire Dalton who after falling over, got back up and skated down the right side boards and into the middle before putting a backhand shot past Murphy.

One of Colgate’s best chances in the first came at the very end of the period when Kaltounkova got free on a breakaway and fired a shot with one second left on the clock, but she was denied by Yale’s goalie. The Raiders also had their lone power play opportunity of the game 20 seconds into it after the Bulldogs were called for tripping.

Colgate outshot Yale 36-30 in the game. The Raiders also kept the Bulldogs scoreless on the power play with two kills on the night.

“Tonight was everything that a championship game should be. Two very strong teams giving it everything they had and a game going to overtime to settle an ECAC championship. Our team has really become one the past handful of weeks and it was just a joy to watch them celebrate together today.

We’re excited to be conference champions and to have an opportunity to continue this journey we’re on together in the NCAA tournament, hopefully right at home in Hamilton, N.Y.”

The Raiders now await their destiny in the NCAA Tournament. The national selection show is scheduled for 9 p.m. on Sunday on ESPN News.