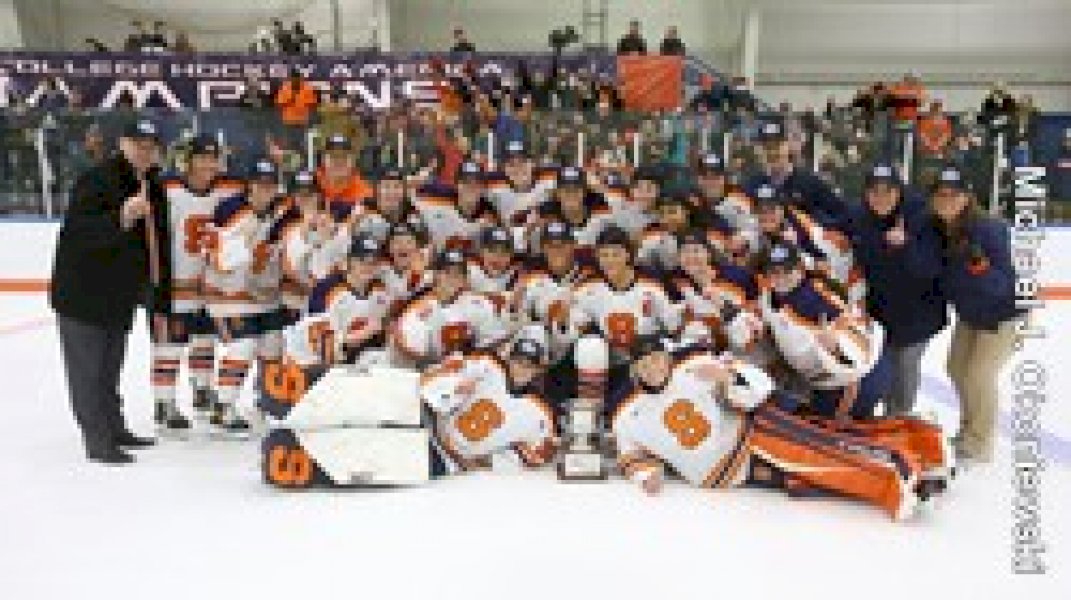 The Orange won the College Hockey America Championship with a 3-2 overtime victory against Mercyhurst on Saturday in front of a sellout crowd Tennity Ice Pavilion. Sophomore Sarah Thompson scored the game-winner after gathering a rebound off of a shot by Jessica DiGirolamo and burying it into the back of the net at the 7:32 mark in the extra session. Syracuse (15-10-6 overall, 11-4 CHA) advances to the NCAA Championship for the second time in program history. Syracuse will learn its’ NCAA Championship destination on Sunday, March 6th.

“To win the league and the championship is so special, especially to do it right here and in front of our fans,” said head coach Paul Flanagan. “The last few weeks in the locker room you could feel it that we were going to pull this out and do good things. It’s a feeling you get. You can’t grab it but you can sense it and these kids have done a great job. Kudos to them. That was a really good college hockey game.”

Moloughney scored the first goal of the game, picking up right where she left off after her hat trick in the semifinal game. The forward took a pass from graduate student Victoria Klimek on the crease and put the shot in the top left corner with 1:50 remaining in the first period. Moloughney, who is one of four Orange in the Syracuse 100 Point Club, is ranks second on the Syracuse career goals record list with 46 and has 105 career points.

In the second period freshman Sarah Marchand gave the Orange a two-goal lead scoring on assists from Tatum White and Anna Leschyshyn. Mercyhurst (21-12-2, 10-6) scored two goals in the second and third period to tie the game.

DiGirolamo had three assists, nine blocks and 14 shots on goal in the two victories. It is the third time DiGirolamo has earned CHA All-Tournament Team honors. The Mississauga, Ontario native has 62 career assists, which is second in Syracuse history, and 95 points, which ranks sixth on the Orange all-time list.

DeSmet recorded 39 saves in two days, including six in overtime against Mercyhurst in the championship game. The Charlotte, Vt. native has 749 saves in 26 games which ranks third on the Syracuse single-game record list.

Syracuse beat RIT in the semifinal, 3-2 in overtime to advance to the championship game. The title game was Syracuse’s 12th overtime contest of the season, which ranks second in program history behind the 2014-15 team that played 13 overtime games. The Orange are 4-2-6 in those games this season.

The Orange will make their second NCAA Tournament in program history. The 2019 team won the CHA Championship and played top-seed Wisconsin in Madison.