The Central New York Women’s College Hockey scene is set to have a big Tuesday night this week as three key matchups are set to take place. The action gets underway at 3 pm EST and continues into the night.

The sixth-ranked Hamilton College Continentals (9-2-0 overall, 5-1-0 NESCAC) kick off the games for the week at 3 pm when they host the thirteenth-ranked Nazareth Golden Flyers (11-2-0 overall, 10-0-0 UCHC). The Continentals took a huge leap up the rankings in the latest national poll, moving up seven spots after a weekend sweep of the then-sixth-ranked Colby Mules, in which Hamilton shut out Colby in both games. It was the Continental’s fifth straight victory against a ranked team (Endicott, which is currently just outside of the top fifteen, was ranked fifteenth when Hamilton swept them four weeks ago). Goaltender Evie Sheridan was named the NESCAC Player of the Week after not allowing a goal in either game against Colby.

At 6:00 pm, a Central New York rivalry re-ignites at the Tennity Ice Pavillion as the fifth-ranked Colgate Raiders (17-2-1 overall, 8-1-0 ECAC) visit the Syracuse Orange (7-13-1 overall, 4-2-0 CHA). This is the second meeting of the season between the teams, as the Raiders defeated the Orange 3-0 at the Class of 1965 Arena on the opening day of the season for both teams. This is Syracuse’s first game back from their end-of-the-semester break, while the Raiders returned to action last weekend. On Friday night they shut out ECAC rival the RPI Engineers 4-0, then on Saturday afternoon, they earned their second straight shutout with a 10-0 trouncing of the Union Dutchwomen.

Closing out the evening’s games are the fifteenth-ranked Utica Pioneers (9-1-1 overall, 7-0-1 UCHC) and the Oswego St. Lakers (9-5-1 overall, 7-2-1 NEWHL), who are set to face each other at the Nexus Center in Utica at 7 pm. The Pioneers are led by a high-flying offense that is ranked third in Division III in goals per game at 5.09, as well as goaltender Angela Hawthorne. Hawthorne is in the top ten in Division III in wins, GAA, and save percentage helping lead the Pioneers to a fourth-best in Division III team goals allowed average of 0.82. The Laker’s success is built on a well-rounded all-around game. They are averaging 2.73 goals scored per game while allowing 1.93. 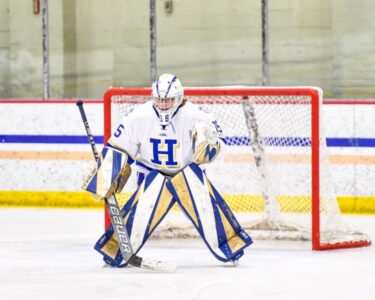 Sheridan ’26 backstops No. 5 women’s hockey in…