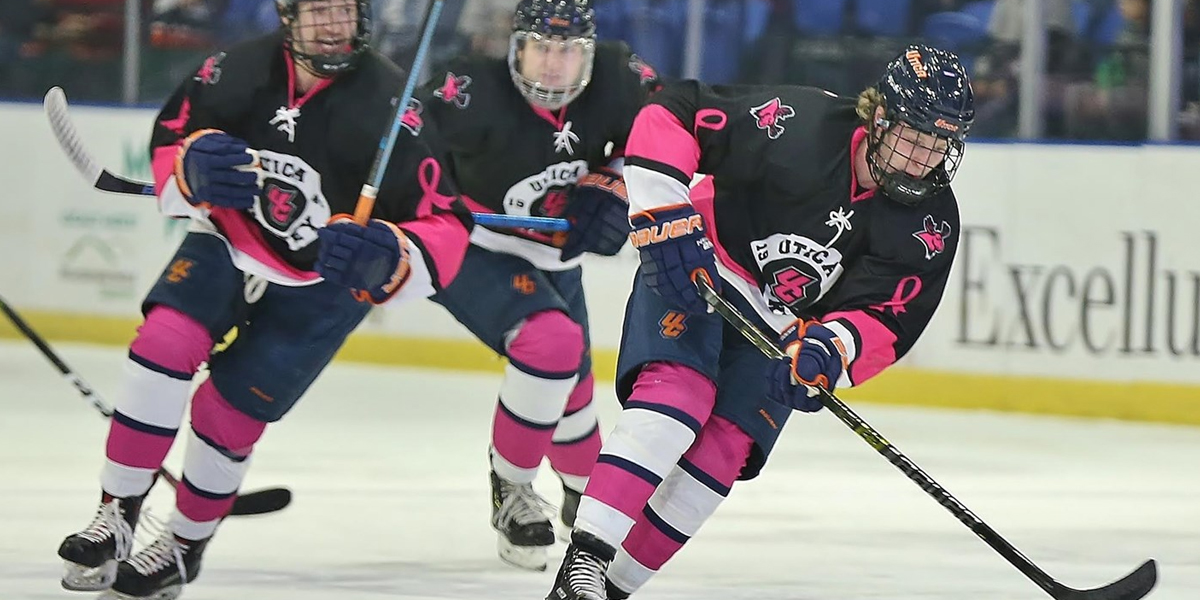 The last time these two teams met was on March 3, 2019 when Manhattanville won the second game and following mini-game of the UCHC Conference Tournament Championship at the Adirondack Bank Center.  This earned Manhattanville an automatic bid to the 2019 NCAA DIII tournament.

Utica got on the board first with a goal at 3:28 in the first period by Tyler Pietrowski (Odessa Jackalopes), assisted by Jacob Cuffley (Smiths Falls Bears) and Daniel Fritz (Canisius College).
The Valiants’ came out of the first intermission with a spark.  Jarod Lavalle (Seacoast Spartans) lit the lamp at 5:09 with an assist from Alex Rowella (Connecticut Roughriders). Then Kyle Miller (Trinity-Pawling) passed the puck to Ken McLean (NY Bobcats), who found the back of the net at 10:32.  However, that was the last score for the Valiants.
Dante Zapata (Austin Bruins) tied it up at 14:01 with assists from Donovan Ott (RPI) and his Swedish teammate, Buster Larsson (Syracuse Stars). Brandon Osmundson (Hampton Road Whalers) got his first goal of his hat trick at 17:31 in the second period to push UC ahead.  He was assisted by Conor Landrigan (Binghamton Jr. Sens).
It only took 18 seconds in the third period for the the feed from Landrigan to Osmundson to find the back of the net again.  This time it was Swede Kasper Kjellkvist (Curry College) who pushed the puck to Landrigan.  Despite the Valiants pulling their goalie, Alexei Masanko (Kingston Voyageurs), in the middle of the third period to create a 6 on 4 power play, they could not get the puck past Gianluca Baggetta (North York), who had 21 saves on the night.  Osmundson earned his hat trick at 18:43 on an empty net, unassisted goal.  Mansanko ended his night with 23 saves.
BOX SCORE