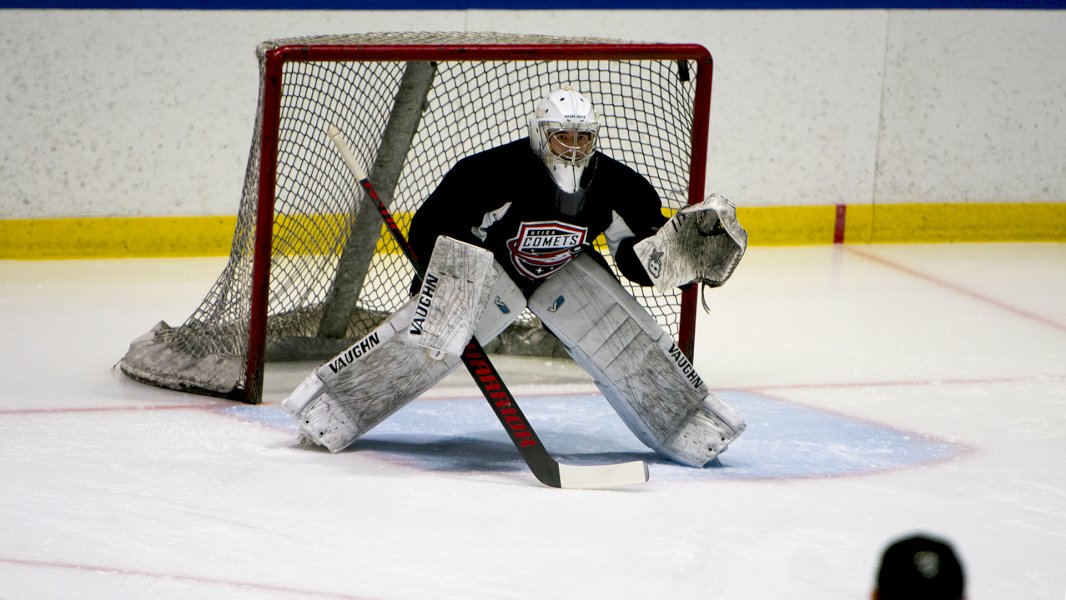 For goaltender Brandon Kasel, walking into the Adirondack Bank Center was a reminder of his younger days playing high school hockey battling it out for the State Championship. Brandon is just one example of someone who climbed the ladder of youth hockey in the Mowhawk Valley and made it to its biggest stage. Now, in the American Hockey League camp for the Utica Comets, the level of hockey has taken a big leap since his younger days as a kid growing up in Ithaca, New York. For Brandon, this experience is almost surreal.

“Honesty, it’s incredible. Since I got here, it’s been a dream. I wasn’t expecting this opportunity and it came up. I played in this rink a few times growing up. Being here at this level is just amazing. Growing up in Syracuse I had great memories playing at the Aud. I played a little bit of high school hockey in the State Championships here. That was a good memory going to the State finals. It’s always been an incredible experience here.”

Brandon is a kid who knows all about the area of Utica and after the merger of the Syracuse Stars junior program two seasons ago. The Stars program started in 1985 and includes former NHL goaltender and President of the Utica Comets, Robert Esche as an alumnus. Brandon played U-18 Midgets in 2014-2015 and one year of Junior Hockey for the Stars in 2015-2016. He truly climbed the ladder within the organization from youth hockey to the pros.

All of the Stars alumni are now part of the Utica Junior Comets program which encompasses the Premier and NCDC teams.

When you grow up in hockey and begin your professional journey, usually you must leave family far behind. But for Brandon, his family is a quick drive away.

“I love having family close. I played college hockey in Saratoga. Everything kind of connects and I’m very tied to this area. So, it’s nice having that support. I grew up watching the Buffalo Sabres. Ryan Miller was one of my go-to guys,” remarked Kasel.

Brandon hopes his career can take the same trajectory as other great American born goalies. If it does, it will be because of his work ethic that even years later isn’t forgotten on those who watched him as an amateur.

Nicole Kelly, Vice President of Business of Development and Director of Junior Hockey remembers Brandon well, “He was a standout goalie in the program. Extremely hard-working kid. Seeing him rise to this level is a testament to not only the program but also Brandon as a person and player.”

The former Syracuse Star is ready for the next step in his career, built on the foundation of great competition in the Upstate New York area. Despite missing last season, he’s thrilled with the experience thus far.

“It was definitely an adjustment. It was my first real practice in over a year. I am just getting a feel for it. So, it was an incredible experience,” said Kasel.