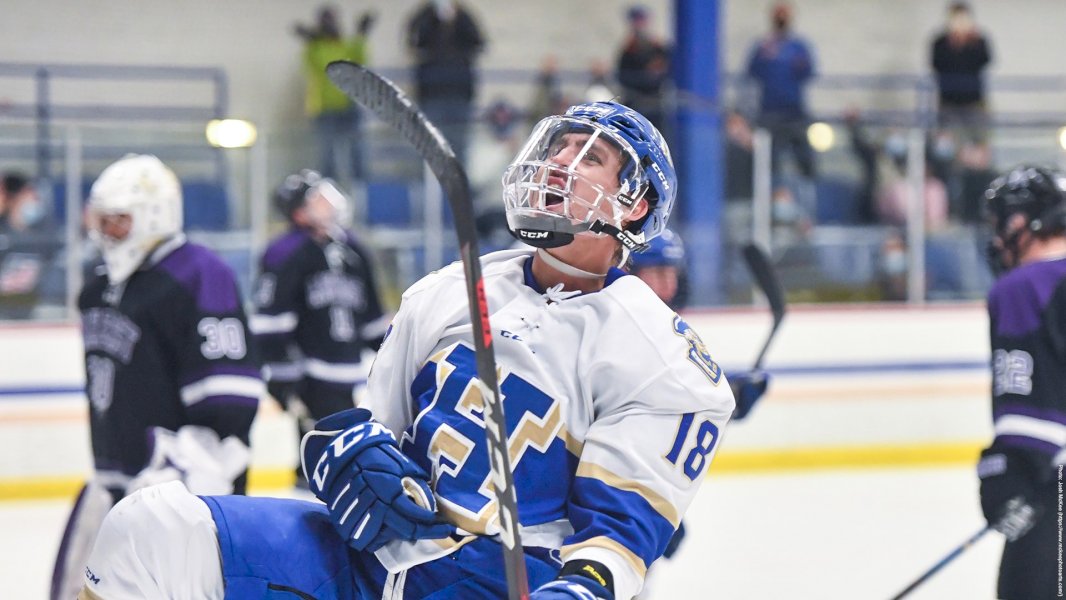 Four Hamilton College players registered a goal and an assist each, and the Continentals beat the Tufts University Jumbos 6-1 in a NESCAC game inside Hamilton’s Russell Sage Rink on Sunday afternoon.

The Continentals (10-8-0, 9-7 NESCAC), who were playing at home for the first time since Jan. 29, won for the third time in as many days. Hamilton recorded its seventh straight victory against Tufts, including a 4-3 triumph in overtime on Friday night in Massachusetts. The Continentals host Williams College for another NESCAC contest on Friday, Feb. 18 at 7 p.m.

Charlie Archer ’25 shut out the Jumbos for the first 55 minutes and finished with 25 saves in his second career start. Fred Allaire ’23, Jeremy Smith ’24, Jordi Jefferson ’22 and Sean McAvoy ’23 tallied a goal and an assist each, and Scott McKenzie ’25 won 12 of 13 faceoffs.

After a scoreless first period, Hamilton’s offense exploded with five goals in the second frame. The first goal came only 16 seconds into the period. The Continentals won a draw in their defensive end and Nick Hawkins ’23 sent the puck around the boards to center ice. Jefferson made a beautiful pass to Allaire for his fourth goal this season.

Hamilton made it 2-0 at 8:52 of the second. Tufts (5-13-2, 5-9-2) attempted to clear the puck out of its end after a faceoff victory but the Continentals intercepted and the teams battled for possession until the Jumbos were whistled for offsides. The next faceoff was right outside Hamilton’s zone, and Allaire eventually collected the puck and fed Jefferson in front of the net for his fifth goal.

Hamilton extended its lead just 16 seconds later after an icing call on the Jumbos that placed the faceoff back in their zone. McKenzie won the draw and defenseman Max Wutzke ’24 collected his first goal on a slap shot that deflected off the skate of the goaltender Peyton Durand (39 saves) in the crease.

The Continentals continued their offensive streak at 9:47 of the second on the second goal this weekend by McAvoy. Matt Gellerman ’24 gained control of the puck and sent it up the ice. Grisha Gotovets ’25 kept it alive off a deflection and McAvoy navigated the defense before he deposited the puck in the back of the net for a 4-0 lead.

With 2:05 left, a Tufts player was sent to the box for interference. The Continentals capitalized on their power-play chance for their fifth goal of the night with 33.5 seconds remaining. Smith scored his second goal this season with a one-timer from the point on a pass from William Neault ’25. Gotovets picked up his second assist of the period.

Trailing 5-0 at the start of the third period, the Jumbos finally got on the board with 4:58 to go on a goal by Angus Scott. Justin Brandt and Aiden Lovett collected the assists.

Hamilton closed out the scoring with a goal by Ryan Brown ’25 while the Continentals had six skaters on the ice due to a delayed penalty call. Brown’s first goal at Hamilton came in the low slot after a centering pass from Smith with 3:03 left.

The Continentals held a 45-26 shot advantage and converted 1 of 3 power-play opportunities.