Syracuse came into the Adirondack Bank Center and beat the Comets 4-0 thanks to a three-point night from Cory Conacher and a 34 save shutout from Connor Ingram.

Syracuse opened the scoring with 5 minutes left in the first when Conacher fired a shot right off the face-off that beat Ivan Kublakov. The goal increased Conacher’s goal scoring streak to five games. A few minutes later while on a power-play Alex Barre-Boulet gathered a loose puck in the slot, spun around and fired a shot that beat Kublakov on the short side.

Just over four minutes into the second Brady Brassart scored on a harmless looking shot that would end Kublakov’s night. He allowed 3 goals on 13 shots. Connor LaCouvee made 8 saves in relief. The fourth Crunch goal was an empty netter scored by Alexander Volkov assisted by Conacher, his second of the night.

LaCouvee got the nod Saturday night in Hartford in what was his first AHL start. The end result wasn’t what he and the team were hoping for. Reid Boucher put Utica ahead 1-0 after his shot from the high slot found the back of the net. Hartford tied it up just under two minutes later. Ashton Sautner scored a power-play goal with assists by Boucher and Jonathan Dahlen. Hartford scored a power-play goal of their own to end the period tied 2-2.

Baldwinsville native Cristoval Nieves broke the tie 14 minutes through the middle frame putting Hartford ahead 3-2. They went on to score three more goals in the third before Lukas Jasek potted a meaningless tally with 10 seconds left for a 6-3 final.

Syracuse went 4-for-7 on the power-play as they downed Laval 6-4 at home Saturday night. The first period ended with Laval ahead 2-1, but the lone Crunch goal was a beautiful tic-tac-toe play finished off by Taylor Raddysh.

Laval went ahead 3-1 before Syracuse took control of the game. Carter Verhaeghe scored on the power-play after taking a perfect cross-ice feed from Andy Andreoff and burying the puck into the top right corner of the net. Four minutes later Andreoff added another beautiful assist on Barre-Boulet’s tying goal.

Cameron Gaunce scored another power-play goal 8 minutes into the third to break the tie and pull ahead 4-3. Conacher who was playing in his 250th career AHL game added his second assist of the night. Eight minutes later Cal Foote extended the lead to 5-3 on yet another power-play goal. Volkov capped the Syracuse scoring with an empty netter before Laval added their 4th goal with 43 seconds left in the game.

Syracuse travels to Binghamton for a matchup against the Devils Wednesday at 7:05pm. 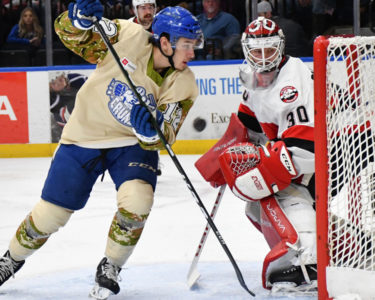