#8 Lakers Down #3 Knights In Powerhouse Matchup 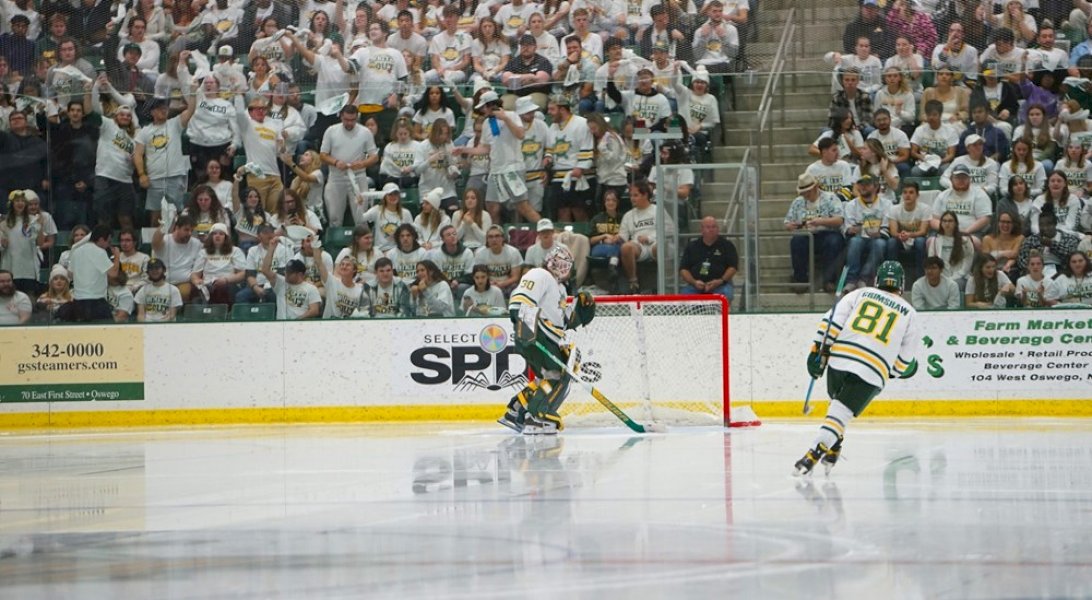 GENESEO, N.Y.  –  The Oswego State Men’s Hockey team traveled to Geneseo this evening to take on the Knights. Oswego was able to secure the victory after a tightly contested contest between the two SUNYAC heavy weights. This is the Lakers’ first victory over the Knights since February 9th 2018.

Oswego was able to strike first early into the contest, with a goal scored by Brett Fudger. Fudger would be assisted by Daniel Colabufo at the 6:26 mark in the first period.

The Knights would respond quickly, scoring a goal of their own 21 seconds later, bringing the score to 1-1.

The remainder of the first period would be scoreless, with both teams having several opportunities to score goals. Cal Schell would have 11 saves in the first frame.

The Lakers would come out hot in the second period, scoring two goals in the first three minutes of play.

Scoring only 52 seconds into the period for Oswego was Trent Grimshaw, getting the assist from Tommy Cahill.

Alex DiCarlo would score 2 minutes and 30 seconds into the period for the Lakers, with an assist from Jackson Arcan and Thomas Rocco. Oswego would lead 3-1.

Geneseo would cut the deficit to 1 with a goal scored just about 9 minutes into the period.

The Knights would tie the game late into the second period with a goal scored 17 minutes into the period.

Cal Schell would add 11 more saves in the second period, bringing his total to 22 saves.

The Lakers would score their game-winning goal off of an early third period power play, granted to them from a high sticking call on Geneseo.

Trent Grimshaw would score his second goal of the night 4 minutes and 29 seconds into the period. Grimshaw would be assisted by Tommy Cahill and Ryan Bunka.

The Lakers would take the highly anticipated matchup over the Knights 4-3.

The Lakers will return to the Deb on Saturday November 19th to host the Brockport Golden Eagles. Brockport is looking to bounce back from a 6-1 loss to the Cortland Red Dragons.