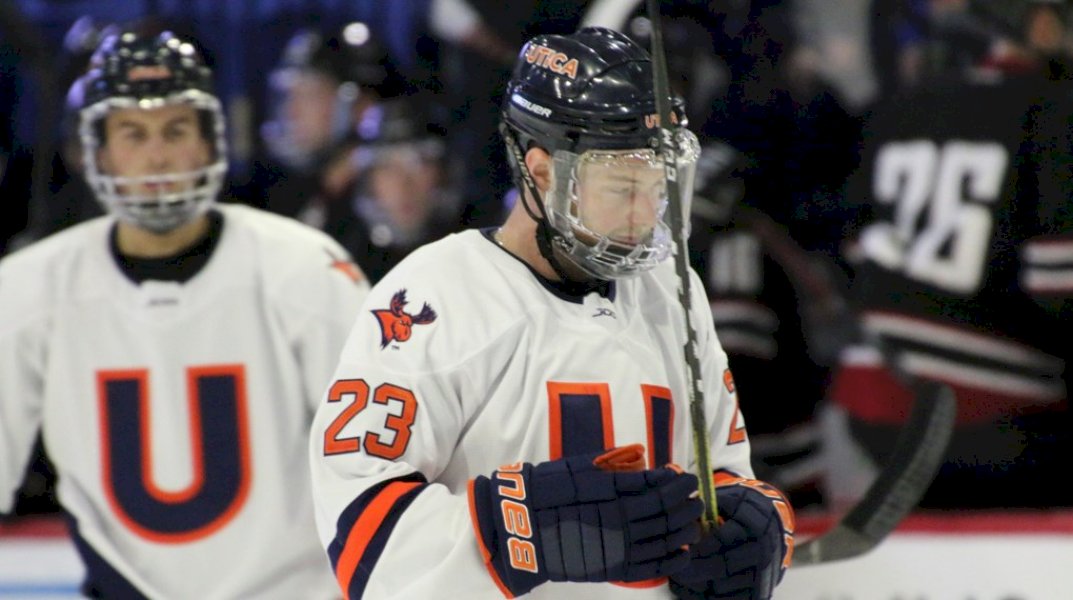 OWINGS MILLS, MD – For the second day in a row, the #5 Utica University men’s ice hockey team won in overtime by the same score. With the game knotted at three goals apiece in a critical conference game, Utica’s Regen Cavanagh (Chesapeake, VA/Sioux Falls Stampede (USHL)) scored at 1:32 of overtime to lift the Pioneers past Stevenson by a 4-3 score in a UCHC game at the Reisterstown Sportsplex.

The win improves Utica’s overall record to 2-2, while Stevenson is now 1-3. The Pioneers scoop up another two points out of a possible three in the conference standings, and exit the weekend with four total against the team picked to finish second in the preseason coaches’ poll. The Pioneers have already played three overtime games this season, with all of them decided by a 4-3 score.

The Pioneers held a 41-30 edge in shots and won 43 of 73 faceoffs. Both teams scored a power play goal apiece on nine total chances.

Bryan Landsberger (Montreal, Quebec/Nepean Raiders (CCHL)) stopped 27 of 30 Stevenson shots in the win, while Stevenson’s Ryan Kenny turned aside 37 shots in defeat for the Mustangs.

Stevenson’s Austin Master lifted the lid on the scoring for the evening at 12:48 of the first period. Not to be outdone, the Pioneers came surging back to level the contest before the end of the period as Remy Parker (Montclair, NJ/University of Maine (NCAA DI)) scored for a second straight night. Parker’s second of the season was assisted by Herrmann and Patton. 1-1 was the score at the end of the first period.

In the second period, the Pioneers countered a goal by Stevenson’s Eric Olson by taking the lead into the third. After Olson scored for a 2-1 lead for the hosts, Brandon Osmundson (Virginia Beach, VA/Hampton Roads Whalers (USPHL)) puffed the back of the net at 14:09 to establish a three game goal scoring streak. Dante Zapata (Huntington Beach, CA/Austin Bruins (NAHL)) picked up the assist. A five minute major on Stevenson’s Anthony Starzi gave Utica the chance to pull ahead as Johnson netted the first goal of his Utica career on the extended man advantage, and the Pioneers led 3-2 after 40 minutes.

Stevenson’s Liam McCanney scored with just over 90 seconds remaining in regulation to force overtime, where Cavanagh scored his third goal of the season to win it.

The Pioneers will hold their regular season home opener on Saturday, November 12th. It’s NYSCOPBA Salute To Veterans night as the Pioneers take on Chatham University. Game time is set for 7 p.m. at the Adirondack Bank Center at the Utica Memorial Auditorium.