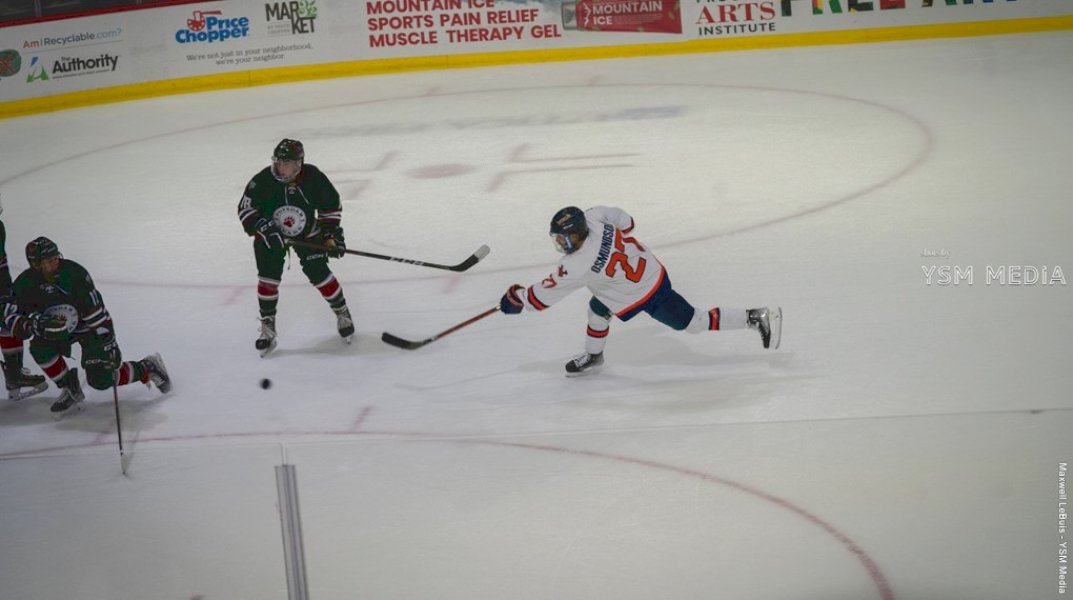 The #5 Utica University men’s ice hockey team is gearing up to open its 2022-23 regular season home schedule this weekend. The Pioneers will host Chatham University for United Collegiate Hockey Conference matchups on Saturday and Sunday. Game time is scheduled for 7 p.m. Saturday for NYSCOPBA “Salute to Veterans” night.  Sunday’s matchup begins at 3 p.m. Both games will be played at the Adirondack Bank Center at the Utica Memorial Auditorium.

Getting Into The Game: Click here to buy tickets online!

Follow Along: Live video and stats will be available at portal.stretchinternet.com/utica. Saturday’s game will also be aired on WPNR 90.7 FM, Utica University Pioneer Radio, and pioneerradio.org. Ray Biggs ’13 is back for his twelfth season of play-by-play with the team.

NYSCOPBA Jersey Auction Happening Now!: The Utica University men’s hockey team will join forces with the New York State Correctional Officers & Police Benevolent Association (NYSCOPBA) to honor our military veterans with the Salute to Veterans Night at Saturday’s home opener. The Pioneers are currently auctioning off their collector’s edition game jerseys ahead of the game, with bidding set to close at the end of the second period. More information is available at NYSCOPBA Veterans Jersey Auction – Utica University Athletics (uticapioneers.com).

Where It All Sits: Utica is 2-2 overall through its first four games played. The Pioneers dropped their first two contests to #1 Adrian College, before bouncing back with a pair of key conference overtime wins over Stevenson University last weekend. They received two standings points apiece for overtime wins, good for four out of a possible six standings points, which currently places them in the fourth position. The nationally-ranked Pioneers remained at #5 in the US College Hockey Online Men’s Top 15 for a second consecutive week after opening the season at #3.

Last Time Out: The Pioneers took down Stevenson with a pair of 4-3 overtime wins on the road this past weekend. Although these matchups were extremely early in the season, that conference weekend could prove to be massively important later on as the Mustangs were picked to finish second in the UCHC preseason coaches’ poll. In Friday’s game, the Pioneers disposed of an early 0-2 deficit with two goals by the end of the first period, and Remy Parker (Montclair, NJ/University of Maine (NCAA DI)) erased a 3-2 deficit with the tying goal before the end of the second period. Just over a minute into overtime, Jayson Dobay (Weymouth, MA/Youngstown Phantoms (USHL)) scored the game-winning goal. On Saturday, Regen Cavanagh (Chesapeake, VA/Sioux Falls Stampede (USHL)) was the overtime hero after Stevenson neutralized a 3-2 Utica lead with around 90 seconds remaining to force an extra session. Parker, Brandon Osmundson (Virginia Beach, VA/Hampton Roads Whalers (USPHL)), and Kimball Johnson (Coppell, TX/University of St. Thomas (NCAA DI)) scored the balance of the Pioneer goals in another 4-3 win.

Mr. Overtime: Saturday’s game-winner was the eleventh game-winning goal of Regen Cavanagh’s (Chesapeake, VA/Sioux Falls Stampede (USHL)) career, which is currently also the school record for game-winning goals in a career. It was also the third overtime winner of his career. Keep an eye on Cavanagh’s point totals heading through this weekend and beyond, as he’s on the edge of hitting 100 career points. The 2021-22 All-American has 95 career points to his name on 42 goals and 53 assists.

Dante Delivers: Although he has no power play goals yet this season, senior captain Dante Zapata (Huntington Beach, CA/Austin Bruins (NAHL)) has made quite a name for himself with the man advantage over the course of his career. After ranking among the national leaders with eight power play goals last season, Zapata has fifteen for his career to rank tied with Conor Landrigan for the second-most in program history. He is three power play goals away from tying Jimmy Sokol’s school record of 18. Zapata has a goal and three assists this season, and recently surpassed 50 career assists.

Some New Parts, But The Machine Keeps Running: One thing the Pioneers haven’t been lacking in the early season is the presence of a consistent offense. The squad has scored either three or four goals in all four outings so far, and that average of 3.50 goals per game still ranks second in the UCHC despite a very challenging four game stretch to start the year.

Must Pick It Up: One area where the Pioneers can create momentum in a hurry is with their power play unit, which is off to a slow start after leading the nation at 34.3 percent last year. The Pioneers have just one power play goal in their first fourteen opportunities to start the year.

The Series: This will be the tenth and eleventh all-time meetings between Utica and Chatham, with the Pioneers winning all nine meetings to date. The Pioneers have averaged 6.9 goals per game when playing the Cougars over those nine games, and the team has scored eight or more goals in four meetings. The last two meetings at the Aud have been decided by 3-0 scores, and all five meetings at Utica have ended in the Pioneers shutting out Chatham. The overall scoring margin through nine games is 62-6 between the two sides.

About Chatham: The Cougars are 2-1-1 to start the season. They bounced back from a loss and tie against Skidmore with consecutive wins against King’s, including a 1-0 shutout on Saturday. Senior defenseman Aidan Girduckis and senior forward Andrew Warhoftig have three points apiece in their first four games to pace the offense, while Ricardo Gonzalez has stopped 67 of 69 shots faced in three games in goal, and is the reigning UCHC Goaltender of the Week.

What’s Next: The Pioneers will continue on a seven game homestand on Friday, November 18th and Saturday, November 19th as they host Wilkes University. Game times are scheduled for 7 p.m. and 2 p.m., respectively, at the Adirondack Bank Center at the Utica Memorial Auditorium.