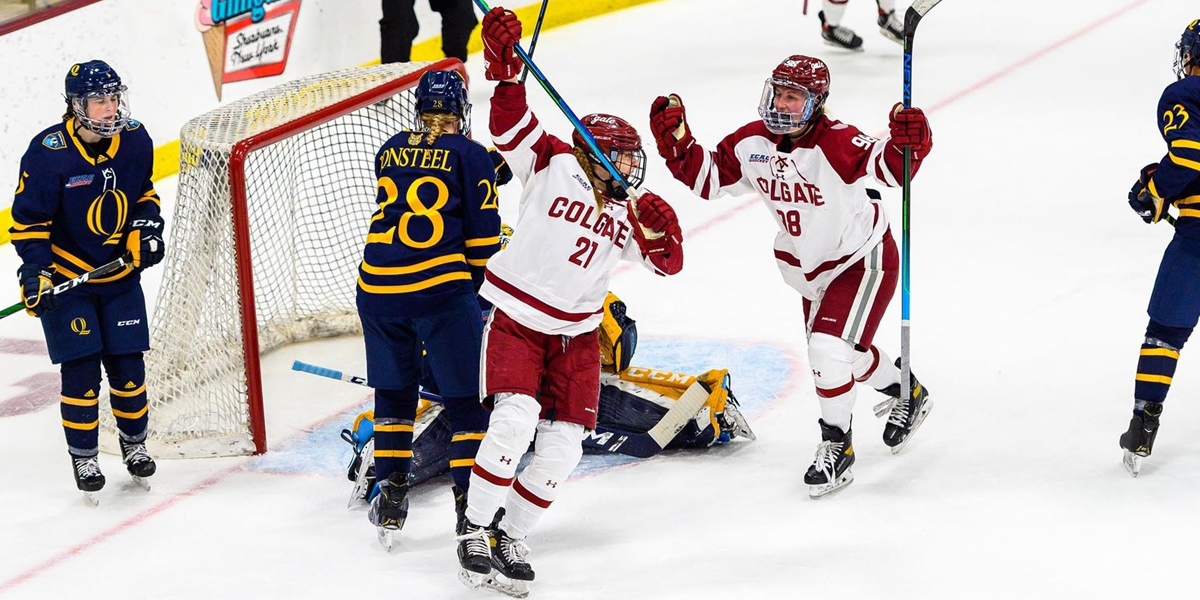 The #5 Colgate women’s hockey team received two goals from Noemi Neubauerova and Kayle Osbrone stopped 21 shots to earn her first shutout in a 4-0 victory over Quinnipiac.

The game was scoreless throughout the first period despite each team having multiple opportunities. After killing off a 5-on-3, the Raiders broke the 0-0 tie at 15:11 of the second period. Taylor Kirwan moved the puck from the defensive zone up to Neubauerova in the neural zone. She skated the puck into the zone before putting a shot on net that trickled through the Quinnipiac goaltender and into the net.

With help from Kirwan and Gates down low, Nemo makes it happen! pic.twitter.com/xAsN6SzMId

Colgate put the game out of reach scoring 2 goals in less than 2 minutes in the third period. The first goal came off a pass from Kaitlyn O’Donohoe to Danielle Serdachny who buried it from the crease. Not even two minutes later, Neubauerova scored her second of goal of the game giving the Raiders a commanding 3-0 lead.

And just 1:54 later, Nemo Neubauerova makes it a 3-0 game with her second of the night! #WePlayFree pic.twitter.com/uwMZWALH1Z

The fourth goal of the game was an empty netter by sophomore Darcie Lappan. It was her first of the season.

The Raiders completed the sweep of #10 Quinnipiac with a 4-1 victory Sunday evening in Hamilton. Serdachny recorded her first multi-point game of the season to help lead her team to the win.

A Quinnipiac penalty handed the Raiders an early power-play opportunity and the home team took advantage. Rosy Demers got assists from Sydney Bard and Delani MacKay to score midway through the first period for the 1-0 lead.

Colgate came out flying in the second period and dominated the period offensively. Serdachny potted a power-play goal off a pass from Kalty Kaltounkova to extend the lead to 2-0. Lappan picked up her second goal of the weekend in the final minutes of the period giving the Raiders a 3-0 lead with 20 minutes to go.

Quinnipiac upped the pressure in the third and was able to capitalize on a power-play opportunity of their own. The Bobcats pulled their goalie with approximately three minutes remaining in the game. This allowed Serdachny to scored a empty net goal giving the Raiders a 4-1 win. Osborne picked up another 21 saves in the win.

Colgate is back on the ice Saturday for the start of a home and home against Clarkson. Puck drop is scheduled for 4:00pm.