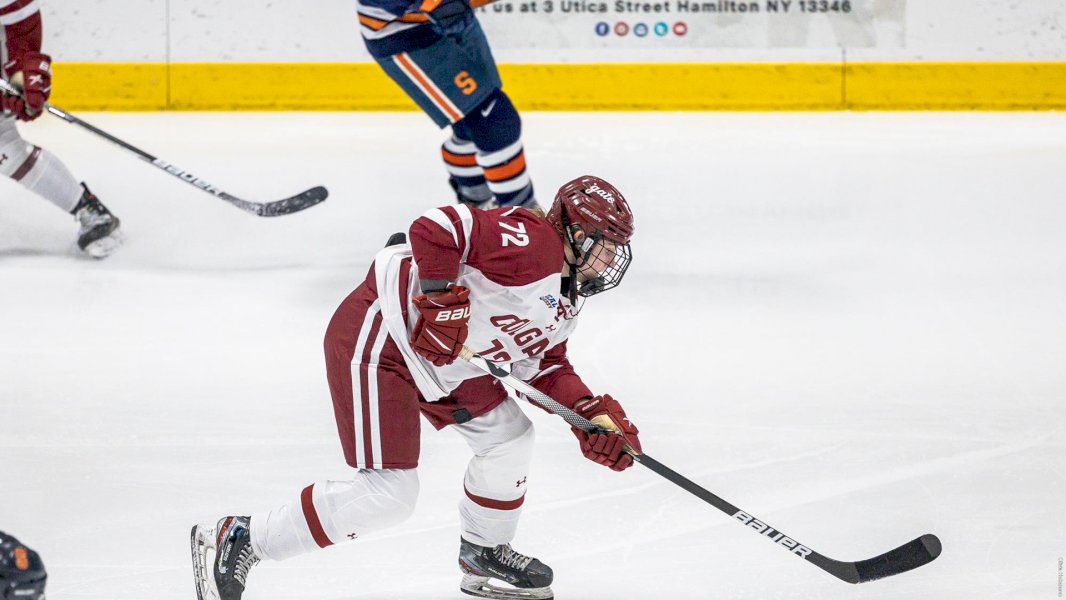 Darcie Lappan scored just over five minutes into the contest with her sixth goal of the season after a great play and assist from Rosy Demers, her 10th on the year. After winning the faceoff and racing down the ice, a great pass by Tanner Gates found Danielle Serdachny wide open at the near post. Serdachny tapped it in for the second goal of the period and her ninth of the season.

Union was awarded their first power play of the game when Eleri Mackay entered the penalty box, but the Dutchwomen were unable to capitalize on it. Quickly thereafter, Colgate struck again with another back door pass from Eleri Mackay to Kaitlyn O’Donohue, who took it in for the third goal of the game.

With less than two minutes to play in the period, Colgate took advantage of a power play off a penalty by Union’s Grace Heiting. In the offensive zone, Lappan chipped a shot toward the center of the net and it deflected off a Union defender for her second goal of the period.

Colgate goalie Kayle Osborne had four saves off of 31 shots for great defensive play between the pipes.

Entering the second period, up four goals to none, Colgate continued to control the game, hammering shots on Union’s goalie Olivia Rinzel, but none fell until late in the period. Both teams saw two power play opportunities but were unable to capitalize. With seconds remaining in the second period, Colgate’s Danielle Serdachny sent a pass to Kalty Kaltounkova who then back-doored the puck to the stick of Dara Greig who notched her 10th goal of the season.

Leading 5-0 after the second period, Colgate continued to outshoot Union on a three-to-one ratio. On a Colgate power play 14 minutes in, Greig added to her season tally with her 11th goal off an assist from Serdachny and Sydney Bard for the team’s sixth goal of the afternoon. Less than a minute later, Kaltounkova scored her first goal of the game with the assist coming from Greig. With under four minutes to play, Union’s Heiting scored off of their fourth power play opportunity with their only goal of the afternoon.

The fifth-ranked Raiders led the stat board in every category in this outstanding effort today.

“That was a pretty complete team win tonight. Our play in the first period really set the table for us tonight. I liked our energy and focus all weekend. It feels good to play well as a collective team and get the win. We’re looking forward to hitting the reset button and playing some important conference games this coming week at home.”

Colgate will face Princeton and Quinnipiac in a pair of ECAC contests at the Class of 1965 Arena next Friday and Saturday, respectively. Puck drop is set for 3 p.m. both days.

Colgate Shut out by Union