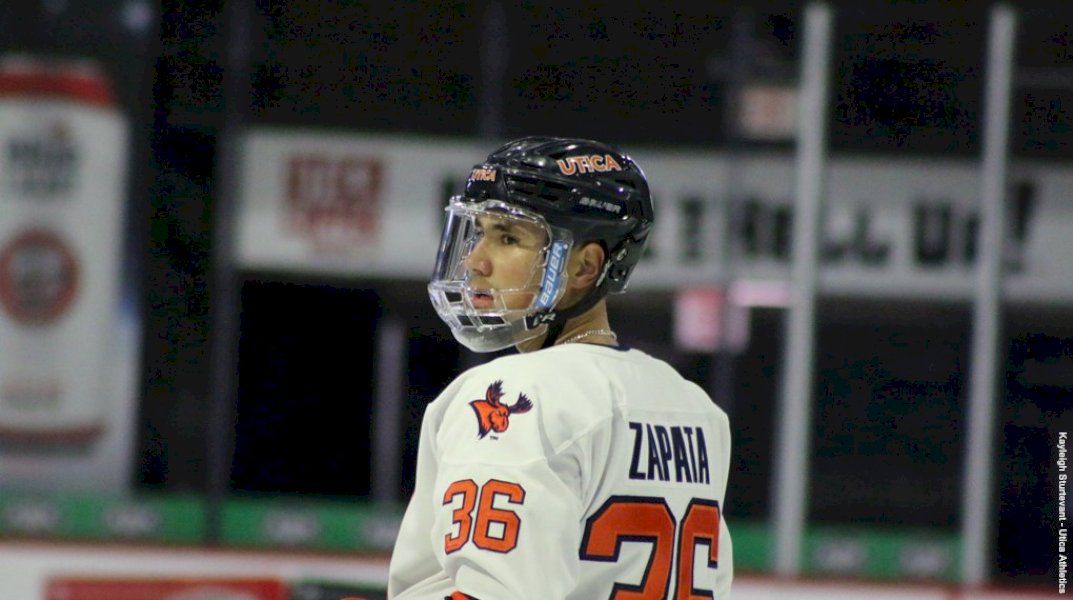 UTICA, NY – After six straight conference games, the #4 Utica University men’s ice hockey team returns to non-conference play this weekend as they host the Delta Hotels by Marriott Thanksgiving Showcase. The Pioneers meet Plymouth State on Friday, before battling Trine University on Saturday. Both of those games begin at 7 p.m. at the Adirondack Bank Center at the Utica Memorial Auditorium. On Sunday, the event concludes with Plymouth State and Trine matching up at the Nexus Center. That final game will begin at 4 p.m.

Following Along: Live video and stats for all three games will be available at portal.stretchinternet.com/utica.

Getting Into The Games: Click here to buy tickets online.

Where It Sits: The Pioneers are 6-2-0 overall and have risen back into fourth in the latest USCHO Men’s Top 15 released on Monday. The Pioneers have also been third, fifth, and sixth this season. Utica has won six games in a row since a pair of season-opening setbacks against Adrian. Utica also holds the conference lead with sixteen of a possible eighteen UCHC standings points.

At Last Year’s Showcase: The Pioneers split against two quality opponents at the 2021 Utica Showcase. They opened the weekend with a Friday win over Amherst by a 3-0 score. John Moncovich (Wilmington, NC/Hampton Roads Whalers (USPHL)), Mic Curran (Arlington, MA/Curry College (CCC)), and Regen Cavanagh (Chesapeake, VA/Sioux Falls Stampede (USHL)) each had a goal, while Brandon Osmundson (Virginia Beach, VA/Hampton Roads Whalers (USPHL)) had two assists to his name. The following day brought an epic #1 vs. #2 clash as the then-#2 Pioneers hosted #1 Geneseo. The Knights carried a 1-0 lead late into the third period before a pair of empty net goals put the game away for the visitors.

Player of the Week: Forward Remy Parker has been named the United Collegiate Hockey Conference Player of the Week, as announced by the league on Monday.  On Friday, Parker netted one goal and tallied one assist in the 6-2 victory. On Saturday, Parker found the back of the net twice in the third period to ice the game and secure the weekend sweep for the Pioneers. It marks Parker’s first UCHC Player of the Week award since his mid-season transfer from the University of Maine last season. Parker has a team-high six goals to start the season, and is 28th nationally in goals per game.

On The Doorstep: Graduate forward Regen Cavanagh (Chesapeake, VA/Sioux Falls Stampede (USHL)) appears primed to join the 100-point club at Utica this weekend. The longtime mainstay in the Pioneers’ lineup currently sits at 99 career points after snagging a pair of assists in Saturday’s win over Wilkes. He has 43 goals and 56 assists for his career, and his next point will make him the sixth Pioneer to record 100 career points with the Pioneers. He would be the third active player on the Utica roster to have that many points in a career. Brandon Osmundson (Virginia Beach, VA/Hampton Roads Whalers (USPHL)) secured his 100th point on an assist during the Wilkes series, and Mic Curran (Arlington, MA/Curry College (CCC)) expanded on a strong three year career with Curry College by nabbing his 100th collegiate point last season. Cavanagh shares the team lead with three others at nine points this season. He has four goals, five assists, and one game-winning goal.

The Fedorek File: With All-American defenseman Justin Allen (Hilton, NY/Rochester Monarchs (NCDC)) currently out of the lineup, Senior defenseman Connor Fedorek (Bethel Park, PA/Ferris State University (NCAA DI)) has picked up the slack and has become one of the conference’s premier puck-moving defensemen almost overnight. The blue liner is riding a four-game point streak, and currently leads the team with nine assists, which also has him level on the team’s points lead.  Included on his stat line this season are two three-assist outings. He is sixth nationally in points per game amongst defensemen.

Starting Off Strong: Senior forward Dante Zapata (Huntington Beach, CA/Austin Bruins (NAHL)) and graduate forward Mic Curran (Arlington, MA/Curry College (CCC)) are also off to strong starts this season, as they share the team’s points lead with Cavanagh and Fedorek at nine apiece. Zapata has three goals and six assists, while Curran has a goal and eight assists. His eight assists rank as the second-most on the team. Curran’s 1.29 points per game rank 46th nationally, while he is eighth nationally in assists per game.

What’s Up, Breault?: In his first year with the team, forward Jakob Breault (Acton Vale, QC/Alaska-Fairbanks (NCAA DI)) has already emerged as a strong contributor for Utica. The Alaska-Fairbanks transfer has seven points on four goals and three assists, and he is the only player on the roster to score multiple power play goals this season with two.

Herrmannator: Salvation: Senior forward Lucas Herrmann (Elma, NY/University of New Hampshire (NCAA DI)) has also provided a nice spark for the Utica offense since transferring in from the University of New Hampshire. Herrmann has points in four out of his last five games, including a three assist performance on Saturday against Wilkes. This season, he has seven points on three goals and four assists, and has two game-winning goals to his name.

About Trine: The Thunder come all the way from Angola, Indiana to represent the West region at this year’s showcase. Trine has opened with a 4-4 overall record, while they are 2-4 in the Northern Collegiate Hockey Association. Despite their .500 record, Trine enters the weekend with one of the nation’s most coveted victories in tow. The Thunder knocked off defending national champion Adrian on Saturday by a 6-2 score at Arrington Ice Arena. Bobby Price had a goal and three assists to lead the way. Price has a goal and eight assists for nine points to lead the team for the season, while Sam Antenucci has started off averaging a point per game as a rookie with four goals and four assists in eight appearances. Cristian Wong-Ramos, Elias Sandholm, and Kyle Kozma have split the starts in net for the Thunder. Trine is coached by former Utica assistant coach Alex Todd.

About Plymouth State: The Panthers are 4-2-1 overall, with a perfect 4-0-0 record in MASCAC play. They have won their last three games. Carson Lanceleve leads the team with ten points on six goals and four assists. Ethan Stuckless was named to the MASCAC Honor Roll on Monday after scoring a pair of goals in a 7-3 win over Worcester State, and has nine points on four goals and five assists this year. All-American forward Myles Abbate has seven points in this campaign so far, and had 40 points in the 2021-22 season. Brendahn Brawley is the team’s workhorse in net, with a 4-1-1 record. The Panthers are coached by Craig Russell.

What’s Next: The Pioneers wrap up their seven game homestand, and regular season play for the Fall semester on Saturday, December 3rd as they host nationally-ranked Oswego State in the New York SASH Teddy Bear Toss at the Aud. The following week, they’ll play an exhibition game against the United States National Team Development program out in Plymouth, Michigan before splitting up for the holiday break.