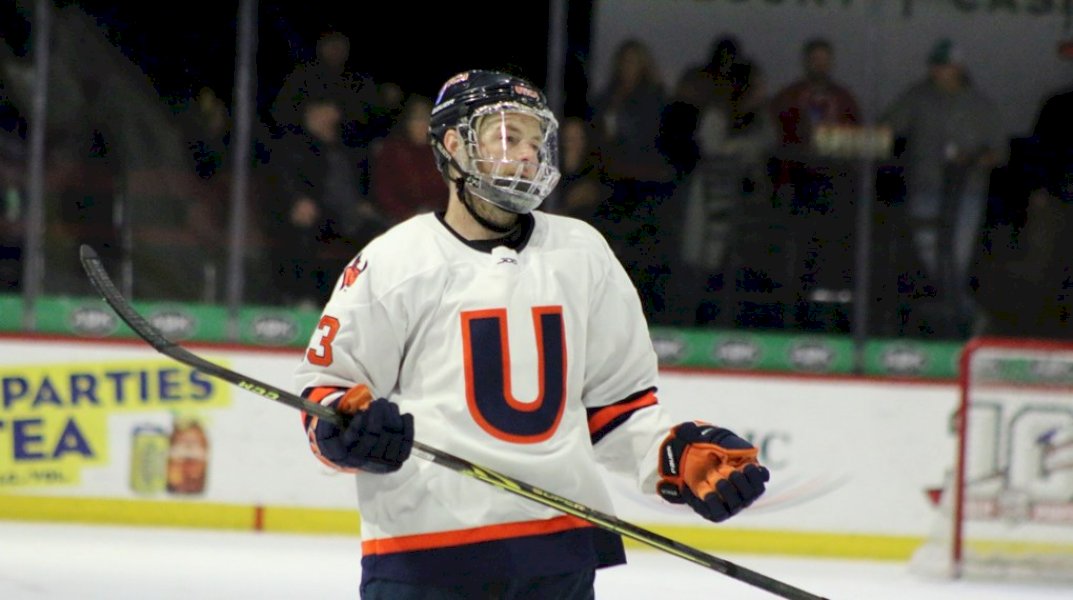 UTICA, NY – With visiting Plymouth State giving the Pioneers all they could handle, #4 Utica turned to experience to snag a seventh straight win. Graduate student Mic Curran (Arlington, MA/Curry College (CCC)) and senior Khristian Acosta (Port Monmouth, NJ/Mercyhurst University (NCAA DI)) had two goals apiece, while senior John Moncovich (Wilmington, NC/Hampton Roads Whalers (USPHL)) netted one of his own as the Pioneers fended off the visiting Panthers by a 5-3 score in a non-conference men’s ice hockey competition at the Adirondack Bank Center at the Utica Memorial Auditorium.

The Pioneers improve to 7-2 overall, while Plymouth State snaps a three game winning streak and falls to 4-3-1.

Graduate student Regen Cavanagh (Chesapeake, VA/Sioux Falls Stampede (USHL)) grabbed his share of the spotlight on Utica’s first goal of the evening, as he picked up the assist for his 100th career point. He becomes the sixth player in program history to record 100 points while on the Utica roster, and the second player in as many weekends to hit the milestone.

In net, Bryan Landsberger (Montreal, Quebec/Nepean Raiders (CCHL)) made 32 saves to out-duel Plymouth’s Brendahn Brawley, who made 34 of his own.

Plymouth got the jump on Utica less than a minute in when Anton Jellvik scored on a wrist shot opportunity from the left wing, with Carson Lanceleve and Colin Stevens collecting the assists.

The Pioneers needed just 24 seconds to respond. A turnover at the Plymouth blue line was made costly by Khristian Acosta (Port Monmouth, NJ/Mercyhurst University (NCAA DI)), who took a direct pass from Regen Cavanagh (Chesapeake, VA/Sioux Falls Stampede (USHL)), made a move on the netminder, and buried his second goal of the season for a 1-1 score. Neither team scored again for the remainder of the first.

Utica surged ahead in the second period on goals by Curran, Acosta, and Moncovich. Ethan Stuckless kept the Panthers within striking distance with a power play goal in the final fifteen seconds of the period, as the two sides headed to the third with a 4-2 score on the board.

Matt Tartaglio tightened the game up further for the Panthers as he banged the puck in from point blank range at 1:37, but Mic Curran (Arlington, MA/Curry College (CCC)) closed out the scoring with a big insurance tally at 16:27 to assure the non-conference win.

The Pioneers continue with their second game in the Delta Thanksgiving Showcase on Saturday as they host Trine University of Angola, Indiana. Puck drop is scheduled for 7 p.m.