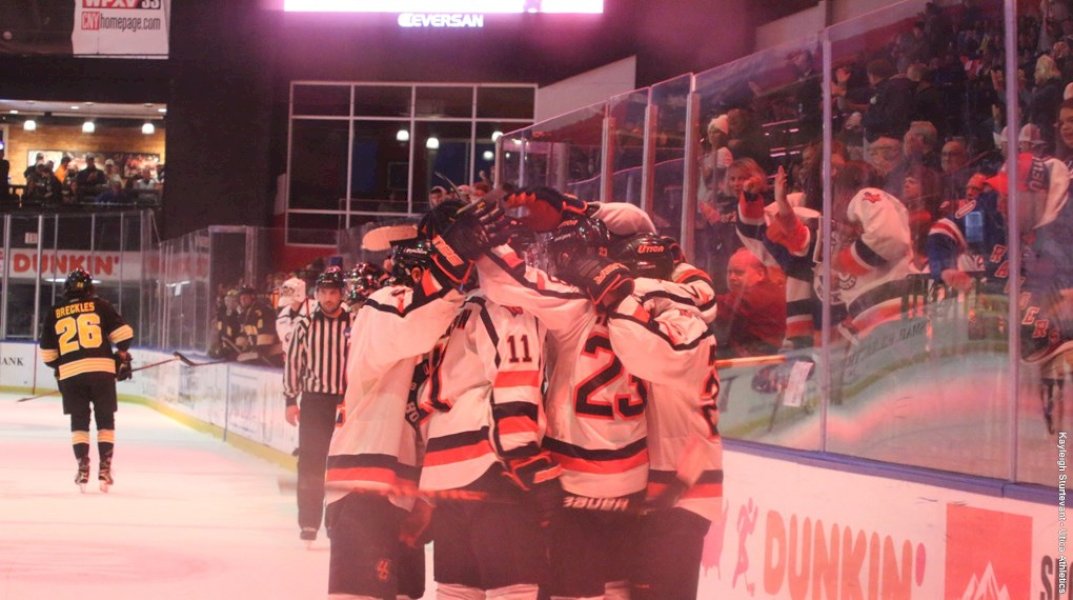 UTICA, NY – The Utica University men’s ice hockey team opens its 22nd regular season with a matchup of seismic proportions this weekend. The #3 Pioneers will head to Adrian, Michigan for a two game set with current #1 team and defending national champion Adrian College. Puck drop is set for 8 p.m. on Friday, and 3 p.m. on Saturday at Adrian’s Arrington Ice Arena.

Follow Along: Live video for this weekend’s games will be available at https://www.youtube.com/c/AdrianBulldogs.

We Meet Again: This weekend’s schedule features the eighth and ninth all-time meetings against the Bulldogs for Utica. The Pioneers are 3-4 all-time against Adrian, including a sweep of the Bulldogs during the 2019-2020 season. Last year, the two teams split a weekend series to start the year at the Aud. On opening night, Utica’s Buster Larsson (Malmo, Sweden/Utica Jr. Comets (NCDC)) cashed in on a poorly executed line change by the visitors with 1:35 left in overtime to propel the Pioneers to a 3-2 win. In the second game, Adrian’s Chase Spencer broke a 3-3 tie with 1:37 to go to salvage a split for the visitors by a 4-3 score. The rest, as they say, was history for Adrian. The Bulldogs have not lost a game since that opening night defeat against Utica, as they went on to capture their first national championship in Lake Placid.

The Records: Utica finished last season with a 25-3-1 and a final ranking of fourth in the USCHO Men’s Top 15. The national champions from Adrian are undefeated in their last 31 games, as they finished with a final tally of 31-1-0 on their title run.

Calm Before The Storm: In their lone preseason appearance on Saturday, the Pioneers fell behind 2-0, then unloaded eight times over the final two periods to defeat visiting Potsdam by an 8-2 score. Highlighting the evening was a thunderous display on the man advantage, with Utica connecting on six power play goals in the win. Adrian defeated future Utica opponent Trine University by a 3-2 score over the weekend in their exhibition contest in Angola, Indiana.

How It Ended Up: Utica finished the 2021-22 season with an overall record of 25-3-1. The Pioneers won their third UCHC tournament title in the last five years and qualified for the NCAA Tournament for the third time in program history.  Utica lost in their NCAA Quarterfinal to the University of New England by a 2-0 score. Over the course of the year, the men in Blue and Orange tied their single-season wins record and set a new program standard for conference wins in a season (17).  The 2021-22 version of the Pioneers also set new single-season program records for goals (164), assists (312), points (476), power play goals (49), goals against average (1.4), and shutouts (seven).

In The Polls: The Pioneers start the year at #3 in the US College Hockey Online Men’s Top 15, up from #4 in last season’s year-end poll.

Recent History: The Pioneers have been fortunate to enjoy their position as one of the winningest programs in the nation over the last half decade. The team has recorded twenty wins or more in a season in their last four opportunities to do so, including two 25 win seasons, and were 8-2 during the shortened 2020-21 season. Along the way, the program has won all five United Collegiate Hockey Conference regular season championships, and has won six straight regular season titles in total dating back to the days of the former ECAC West. Utica also has recorded twelve consecutive winning seasons, with their last below-.500 finish happening in the 2009-10 season.

By The Numbers: The Blue and Orange may have been the most entertaining show on ice in all of Division III last season, and the numbers firmly back up that statement. The Pioneers ranked second nationally with 5.66 goals per game, and held opponents to a Division III best 1.38 goals per game. The special teams were also virtually spotless. An 89.7 percent penalty kill rate was third-best in the nation last year, and the Pioneers led the country on the power play with a positively vicious 34.3 percent.

It’s Gotta Be The Shoes: Senior captain Dante Zapata (Huntington Beach, CA/Austin Bruins (NAHL)) leads the Pioneers into the 2022-23 season. In his junior season, Zapata finished the year with 43 points on 16 goals and 27 assists. He finished in a tie for fifth in the nation with eight power play goals. Six of his power play goals came over eighteen conference regular season games. He has also established himself as one of the nation’s premier faceoff centermen. He was a finalist for the Sid Watson National Player of the Year award.

The Cavy Connection: Graduate student Regen Cavanagh (Chesapeake, VA/Sioux Falls Stampede (USHL)) had a career season last year en route to first team All America honors. He finished tied for the team lead with 46 points (20 goals, 26 assists) last season. Cavanagh is now tied for first in Utica’s single-season record book for points and he is second in goals (20). Cavanagh finished the year tied for fifth nationally with 1.64 points per game. He currently sits at 90 career points. Cavanagh has been known to cause Adrian a fair amount of trouble during his career, with four goals and three assists to his name in games against the Bulldogs. He scored both game-winners to beat the Bulldogs in January 2020.

Dynamic Defenders: A pair of dynamic two-way defenders guide Utica’s defensive corps heading into the 2022-23 season. First team All-American defenseman Justin Allen (Hilton, NY/Rochester Monarchs (NCDC)) returns for his graduate year. Allen, who is the highest scoring defenseman in program history, finished fourth on the team last year with 40 points.  His 32 assists set a new single-season program record.  He wrapped up the season ranked third in the country with 1.14 assists per game.  He has totaled 87 points (14 goals, 73 assists) in 97 games played, and has a career-spanning ironman streak going. Junior defenseman Jayson Dobay (Weymouth, MA/Youngstown Phantoms (USHL)) became the program’s first-ever Sophomore All-American last season. In 2020, Dobay was Neutral Zone’s highest-ranked uncommitted prospect at the time he chose Utica, and he has lived up to those expectations. Last year, he totaled 35 points on seven goals and 28 assists. Five of his seven goals last season came on the power play, which helped Utica achieve the best power play percentage in the country.  Dobay finished the year ranked eighth nationally with an average of 1.00 assists per game.

Who’s New On Defense: The Pioneers bring in a pair of exciting transfer defensemen from midwestern Division I programs for this season. Six-foot-tall senior Connor Fedorek (Bethel Park, PA/Ferris State University (NCAA DI)) joins the Pioneers after three seasons playing for coach Bob Daniels at Ferris State. He had a goal and seven assists in 67 games with the Bulldogs. Kimball Johnson (Coppell, TX/University of St. Thomas (NCAA DI)) is a junior from Coppell, Texas, located just outside of Dallas. Johnson spent the last two seasons with St. Thomas during their transition from Division III to Division I, and he appeared in 31 games playing for head coaches Jeff Boeser and Rico Blasi. Johnson had two goals and six assists during St. Thomas’s first Division I season.

The New Guys Up Front: A mix of transfers and freshmen will come together on the team’s forward lines this season and entrench themselves in a deep group. One of them stays in the building after a tremendous career with the Utica Junior Comets. Forward John Gutt (Middletown, NJ/Utica JR Comets (NCDC)) starred for the Comets’ NCDC and USPHL Premier teams over the last three seasons, and had an impressive 54 points in 49 games last year. Freshman classmate Chris Carroll (Islip, NY/New Jersey Titans (NAHL)) averaged over a point a game while splitting his last NAHL season between North Iowa and New Jersey. Rookie Drake Barnish (Reynoldsburg, OH /Cincinnati Cyclones (USPHL)) joins the Pioneers after a record-setting USPHL Premier career with the Cincinnati Junior Cyclones. Barnish finished his USPHL junior career with 220 regular season points, and held the USPHL Premier career scoring record for two days at the end of last season. Senior forward Lucas Herrmann (Elma, NY/University of New Hampshire (NCAA DI)) spent the last three seasons in Hockey East with the University of New Hampshire, and had three goals and eight assists for eleven points with the Wildcats. He is a former college teammate of 2021-22 Utica Comet Patrick Grasso. Junior Jakob Breault (Acton Vale, QC/Alaska-Fairbanks (NCAA DI)) played eighteen games last season for Alaska-Fairbanks, and had three goals and an assist with the Nanooks.

Between The Pipes: With career shutout leader Sean Dickson (San Francisco, CA/Hampton Roads Whalers (USPHL-Premier)) moving on, Bryan Landsberger (Montreal, Quebec/Nepean Raiders (CCHL)) opened camp as the leading candidate to be the team’s opening night starter. The 6-foot-6 menace was awesome in relief of Dickson as a freshman, with a 96.5 save percentage and 5-0-1 overall record. Rookie goaltenders Andrew Doran (Orchard Park, NY/Peoria Mustangs (NA3HL) ) and Avery Sturtz (Marion, IA / Maine Nordiques (NAHL)) round out the group entering their freshman seasons. Doran spent his final year of juniors with thirteen appearances with NA3HL Peoria, and one with Springfield in the NAHL. Sturtz stopped 90.4 percent of the shots he faced in 40 games with the NAHL’s Maine Nordiques last season.

Adrian By The Numbers: The defending national champions were the only team in the nation last year to score more often than the Pioneers, with an average of 5.94 goals per game. They were eighth in the nation in scoring defense at 1.94 goals allowed per contest. The Bulldogs were sixth in the nation on the power play at 28.6 percent, and they killed penalties at an 88.3 percent rate, good for seventh nationally. Luciani led the team in scoring last season, and was fifth in the nation at 1.60 points per game, and was seventh in the country at 1.03 assists per game.

What’s Next: The Pioneers follow this weekend’s clash with Adrian with a twinbill against UCHC rival Stevenson on November 4th and 5th.