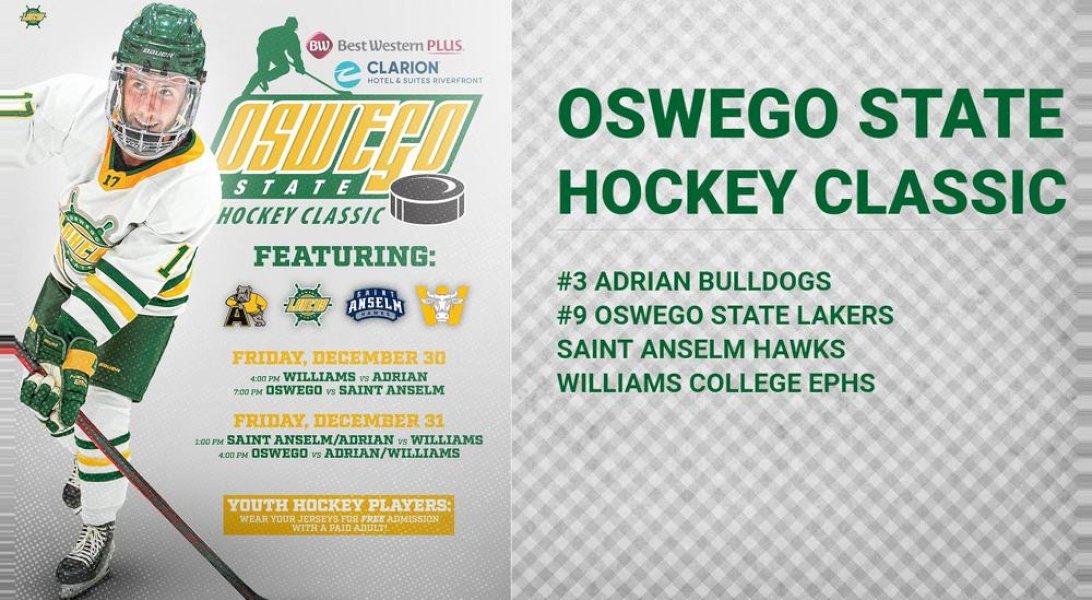 Last season Oswego was defeated by the #4 Ranked Auggies of Augsburg 2-1 in regulation in their first round matchup. The Lakers matched up with the ‘Roos of SUNY Canton in the consolation matchup and defeated the ‘Roos by a score of 3-2.

#4 Augsburg then went on to defeat the Thoroughbreds of Skidmore by a score of 2-0 for the Oswego Hockey Classic Tournament title.

St. Anselm enters the Best Western Clarion Inn Oswego State Hockey Classic with an overall record of 8-3-1, 5-3-1 in the NE10 conference.  The Hawks most recently defeated the Penmen of Southern New Hampshire University by a score of 3-0. Tommy Schwartz opened up the scoring for the Hawks on the powerplay in the first period at the 15:16 mark. The goal was assisted by Max Burum and Andrew Andary. Burum added a goal of his own in the second period at the 2:00 mark to put the Hawks ahead 2-0 going into the third period. Mark Blaney put the game out of reach with just 19 seconds remaining in the contest, earning St. Anselm a 3-0 victory over their conference opponent.

Andrew Andary and Matt Hayes sit atop the Hawks in points with 12 apiece. Middletown, Connecticut native Chase Reynolds is currently in the lead for goals on the Hawks roster. The Sophomore has four multi-point games in the 2022-23 campaign.

The Oswego State Men’s Ice Hockey team enters the 2022 Best Western Clarion Oswego State Hockey Classic at #9 in the national rankings with a record of 9-4-0, receiving 124 votes. The Lakers are 7-1-0 in conference with a 4-1-0 record at home, a 4-3 record on the road and are 1-0 in neutral sited contests. Oswego is coming off of a 2-0 conference weekend against the Bengals of Buffalo State and Fredonia. The Lakers took down the Bengals by a score of 5-2 and the Blue Devils by a score of 3-0.

At the top of the Lakers stats thus far is Alex DiCarlo with eight goals and four assists totaling 12 points in just 11 games. Tommy Cahill also has 12 points with five goals and seven assists on the year in 13 games played. DiCarlo has two game-winners on the season and Cahill has one. Cal Schell leads the Lakers in between the pipes with an overall record of 7-3 with a total of 260 saves, 555:26 minutes played, a goals against average of 2.27 and a save percentage of .925. Eric Green leads the Lakers in shutouts with one, coming against the Blue Devils in Oswego’s last contest, earning 18 saves in the SUNYAC contest.

The defending national champions of Adrian College enter the 2022 Best Western Clarion Oswego State Hockey Classic at #3 in the country in the most recent USCHO poll with a record of 7-2-1 and received 259 points. The Bulldogs have a 4-2-0 overall NCHA conference record, a 3-2-0 home contest record and a 4-0-1 away contest record. Most recently the Bulldogs had a conference-sweeping weekend over the Milwaukee School of Engineering with scores of 5-1 and 8-4.

At the top of the Bulldogs stat sheet is Matus Spodniak, the Kosice, Slovakia native enters the 2022 Best Western Clarion Oswego State Hockey Classic with 20 points, including 13 goals and seven assists. The senior also leads the team in goals and enters the tournament with nine points in his last five contests. Leading Adrian in assists is Sam Ruffin with 12. Dershahn Stewart leads the Bulldogs in net with six starts, 361:09 minutes played, a goals against average of 2.66, 147 total saves, a save percentage of .902 and a record of 4-1-1.

Williams College enters the 2022 Best Western Clarion Oswego State Hockey Classic with an overall record of 3-5-0 and a 2-4-0 NESCAC conference record. The Ephs have a 1-2-0 home contest record and a 2-3-0 overall away record. Most recently the Ephs were taken down by the Hamilton College Continentals by a score of 4-2. The Continentals got off to a 3-0 start with goals at the 1:03 mark of the first period, 4:29 of the second period and 12:27 of the second period. Williams fought to get back into the contest, scoring their first goal of the contest 19 seconds after Hamilton’s third goal to cut the lead to two goals. The contest entered the third period at 3-1 where the Ephs struck first on the powerplay, just 1:18 into the period bringing the contest within one goal (3-2). Hamilton put the game away with a powerplay goal in third period, earning the 4-2 victory over the Ephs.

At the top of the Ephs’ statistics sheet is Sean Clarke with seven points. The Kirkland Quebec native got to seven points by way of two goals and five assists. Leading Williams in goals is Mac Carso and Jonah Gold, both with four goals each. The leader in between the pipes is Evan Ruschll, the Katonah, New York native has six starts, 364:07 minutes played, a goals against average of 2.47, 212 total saves, a save percentage of .934 and a total record of 3-3-0 on the season.

Following the Oswego State Hockey Classic, Oswego will travel to Plattsburgh for their holiday tournament at 3:30 p.m. on Friday, Jan. 6.

Tickets for the Best Western Clarion Inn Oswego State Hockey Classic are currently available online at tickets.oswego.edu, by calling the box office at 315-312-3073 or by visiting the box office during its hours of operation. Students are encouraged to collect their free ticket for hockey games through the online portal for an easier and quicker process.