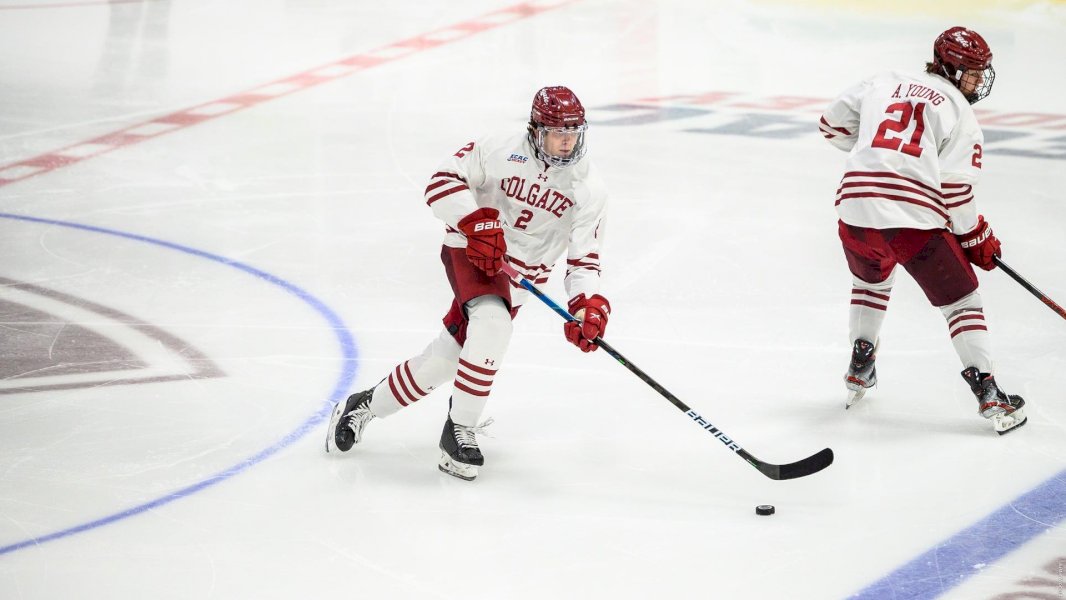 BRIGHTON, MASS. – Too much Alex Laferriere kept Colgate from the win column for the fifth consecutive game as 13th ranked Harvard defeated the Raiders 5-1 at Bright-Landry Arena. Laferriere, a sophomore who entered the game with one goal on the season, scored four against the Raiders.

Harvard opened the scoring just 3:13 into the contest as Alex Gaffney scored the first goal of his career on a backhand in front of the net to the lower left corner. Ian Moore and Marshall Rifai each notched an assist.

It took the Raiders just 24 seconds to answer as Pierson Brandon shot from the outer side on the left circle to the right side of the net beating Harvard netminder Derek Mullahy. Griffin Lunn and Nick Anderson were credited with the helpers.

The Crimson notched the go-ahead goal with 8:02 remaining in the period when Laferriere tallied his first of the game on a tipped shot by Ryan Siedem off the left post. Rifai recorded his second assist of the night on the play.

The second Stanza belonged to Laferriere who not only completed the true hat trick in the second but deposited Harvard’s third, fourth and fifth goals. At 14:14 Laferriere took a feed in front of the goal from Nick Abruzzese who had camped out by the crease and taken a dump-in pass from Casey Dornbach. The one-timer gave the Crimson a 3-1 edge. Exactly three minutes later Laferriere drilled a transition goal to the top right of the net off feeds from Marshall and Abruzzese. Rifai notched his third assist of the night on Laferriere’s next goal as Dornbach sent a cross ice pass to the left faceoff circle. Rifai spotted Laferriere streaking down the middle, and the sophomore buried his fourth straight goal.

The third period was scoreless despite power play opportunities for each squad in the final 20 minutes. Colgate held Harvard’s nationally second ranked power play to no goals in six attempts. Colgate was 0-4 with the extra man advantage.

Mullahy, making his first collegiate start had 24 saves in 25 shots. For the Raiders Andrew Farrier made 20 stops on 25 Harvard shots.